With the heaps of season and series premieres that accompany each fall, one show which I’ve been waiting for has been “Once Upon a Time.” I watch this show and treat it as something of a guilty pleasure; I don’t particularly enjoy it, it’s really not all that good, but I watch it weekly all the same, in the hopes that something really interesting will happen. The show’s creators, in an effort to make fans squee/to cash in on Disney’s biggest singular success in recent years, has hopped onto the “Frozen” bandwagon.

…The slash/incest fanfiction is just gonna blow up, isn’t it?

Naturally, I tuned in to watch what they would do with, apparently, everyone’s favourite sister duo.

(Spoilers after the bump.)

The episode opened with a closer look at the final moments of the King and Queen of Arendelle, just before their boat capsized. We see the Queen write a letter, shove it into a bottle, and the King hauling it overboard, in the hopes that whatever incredibly important revelation will somehow make it back to their daughters.

Of course, since it’s a brief and mostly familiar scene, and because we soon cut to the characters most viewers are far more invested in, the show’s producers are probably hoping that we’ll forget about that until it reappears at just the perfect moment for drama later in the season… 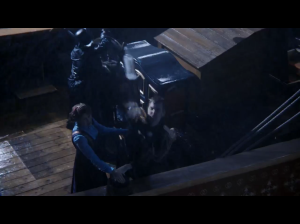 Anywho, we see Rumple and Belle, Rumple trying to take back the dagger switch he did just at the end of last season, saying that he really only wanted it for a moment to get revenge on Zelena. We see Regina teetering on the brink of villainy again as her True Love Robin Hood’s wife has come back into the picture, going back and forth between scheming with her newly reinstalled Magic Mirror and saving Maid Marian from Marshmallow, the giant attack snowman Elsa conjures as her protector.

And, of course, we see Elsa. Through the show’s typical flash-back-and-forth method of storytelling, it becomes clear that, a day before her wedding, Anna has run of to “Mist Haven” (AKA “The Enchanted Forest”) to investigate a vague statement in their mother’s journal which may allude to the trip they took being made specifically to find help with Elsa’s powers, putting indirect blame for their untimely deaths on the Queen of Arrendelle’s platinum blonde head. Elsa, full of feelings as she is, does not take this well, which is what leads Anna, the idealist without the ability to truly think things through, to her solo quest. We also, of course, learn that Hans and his “12 angry brothers” are still out there, waiting for the perfect moment of weakness wherein to strike.

So, okay, groundwork for conflict has been lain out. Groovy.

The casting for the characters, so far, looks… Okay. I want to like Anna but I’m not seeing enough of the personality from the animated feature, but I chalk that up to writing. Kristoff, from what little we’ve seen of his so far, seems a bit leaner and considerably more cleaned up that the smelly booger-eater raised by trolls that we’re used to. Sven makes an appearance, played by a real reindeer and so much less expressive than in the film. 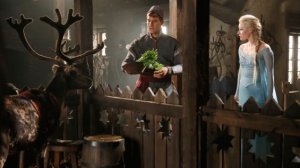 Grand Pabbie also makes an appearance, and is kind of cheesy-looking, as they pretty much just used the models from the movie, making his cartoonish appearance stand out quite a bit from the rest of the real world. In fact, it kind of bothers me that they’ve modified the stories of every other Disney character and fairytale used in the show but seem to be sticking very closely to the established lore of the movie.

But, let’s talk quickly about Elsa. Aside from seeing her give her mother’s wedding dress to her sister and then witnessing her feelings of guilt as she reads a single sentence out of context and blames herself for her parents’ deaths… We don’t really see all that much. The couple of things we can figure out are that she hates Rumple (derp a derp a derp). Some bad shit has happened to Anna and he had something to do with it. And she has this whole complex about thinking she’s a monster still and everything, so she’s keeping hidden from everyone in Storybrooke, sending monsters after them and freezing shit because that’s how you win people’s hearts.

But what i care about much more than anything else that happened in this episode came towards the end, and it’s something that I touched on in this post from the end of last season.

Do they– Do the writers read this blog? Because, holy schnitzel, Regina (my favourite character of the show, by the way) is going to try to find the writer of the book! 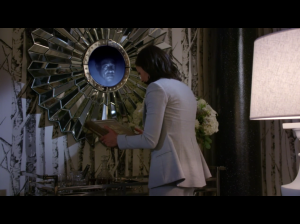 Finally! Someone has addressed it! And they’re going to do something about it! And it’s going to become a major plot point!

And it’s still on this show which is 98% ridiculous.

So it probably won’t live up to my expectations. 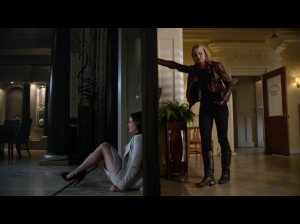 Do you wanna build a snowman? 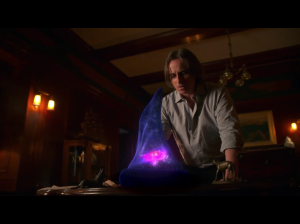 I’m actually super concerned that we’re about to jump the shark here.

I mean, are we going to see a CGI Mickey Mouse pulling all of the strings behind the scenes here? Or are we going to introduce a wise, old, Yensid to the mix? Or is it going to be revealed that Walt Disney’s severed head has been kept alive all this time, not through cryogenics, but through some sort of black magic?

What did you all think was the biggest revelation from the season premiere of “Once Upon a Time?” Let us know in the comments! 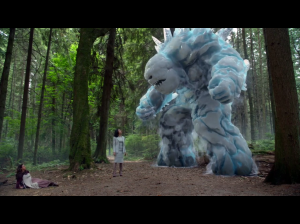