More casting news about the Netflix series Daredevil, Rosario Dawson and Elden Henson will be joining the cast. 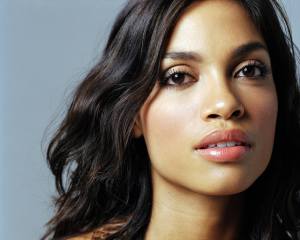 “a dedicated young woman whose quest to heal the wounds of Hell’s Kitchen brings Matt Murdock unexpectedly crashing into her life, while her own journey forever alters the course of his battle against the injustices of this broken city.”

That is a synopsis of Dawson’s character, there is not exact word on who she will be playing but many people are speculating that she might be taking on the role of Electra.  I could see her in such a role, Sin City has given us a good idea of what she might be capable of.  At the same time she might not be taking over that role and might be playing someone completely different because the show had no problem letting us know who was playing Kingpin.  Since Electra is such in an important role in this universe it would be shocking if they did not put her in the series.  If no one else is cast as Electra officially before the series airs then Rosario Dawson is Electra.

Henson will be playing Foggy Nelson who happens to be Matt Murdock’s best friend and legal partner.  The description for Foggy Nelson is:

“tight with the Hell’s Kitchen community, making him a friend to many in all walks of life.”

Many people should remember Henson from the Mighty Ducks movies and we will see him as Pollux in Mockingjay.  I know Marvel is rather excited about this casting.

Vincent D’Onofrio will be joining the Netflix series ‘Daredevil’

As we all know Netflix will be airing a new Marvel series; Defenders which will include stand-alone series for Daredevil, Jessica Jones, Iron Fist and Luke Cage.  After the stand-alone series they will all come together for the Defenders series.  Almost like the Avengers movies, since Marvel has such success with that who can blame them for trying it again.

There has been some recent casting news, Vincent D’Onofrio will be joining the Daredevil series as Kingpin.

“D’Onofrio will play Wilson Fisk, a powerful businessman whose interests in the future of Hell’s Kitchen will bring him into conflict with the blind attorney Matt Murdock and his alter ego Daredevil.”

The studio is very excited about D’Onofrio joining the series:

“We’re incredibly proud to have an actor with the gravitas and versatility of Vincent joining ‘Marvel’s Daredevil’ in such an integral role,” said Jeph Loeb, Marvel’s head of television. “Wilson Fisk is an iconic villain whose cunning and power make him the dangerous equal of our hero.”

D’Onofrio was cast a few months ago in the new Jurassic Park movie, he’s previous credits include Men in Black, Full Metal Jacket, and Law & Order: Criminal Intent.  He played the villain Edgar in Men in Black and has taken on that role in a few other works.  He should make for a good contrast to the hero Daredevil who will be played by Charlie Cox of Boardwalk Empire.

What do you think of the newly casted Kingpin?