Category Archives: Wolverine and the X-Men

Wolverine and the X-Men #3 Review 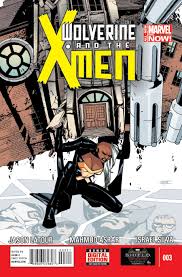 Last issue we found out why the Phoenix Corp was sending out the Phoenix symbol onto all electronic devices. Mainly it was to get Quentin to come by the Phoenix Corp. Apparently, they might also be planning on killing Evan, life is hard being an Apocalypse clone.

END_OF_DOCUMENT_TOKEN_TO_BE_REPLACED

Wolverine and the X-Men #2 Review

In last issue, we find out that all the teachers are gone because Wolverine gave them time off. The graduate students have stepped up to help watch the kids that stay over the summer. Wolverine tried to recruit a new teacher but failed.

END_OF_DOCUMENT_TOKEN_TO_BE_REPLACED

Posted in Comic Review, Marvel Comics, Wolverine and the X-Men

Wolverine and the X-Men Vol 2 #1 Review

In February, Marvel decided to end Wolverine and the X-Men and relaunch a Volume 2 of the series in March as part of the all-new Marvel Now.  The second part focuses more on the students especially since it takes place during summer break.

The issue starts with a glimpse into the future with Kid Omega aka Quentin Quire and Idie are fighting Apocalypse by the grave of Wolverine. 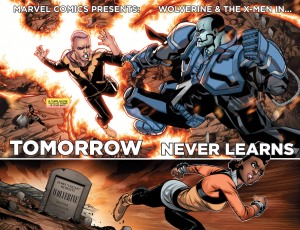 Back to present day Quentin is talking about possibly running away because he is nervous about being a teaching assistant.

Idie makes fun of him but also reminds him that he can do it.  She really is a good girlfriend (at least I think she is his girlfriend).

Trevor aka Eye Boy is meeting Lin Li, a new student at the school, she can control and bond with animals.

At The Block, the interdimensional prison Wolverine is getting ready to fight some red skinned mutant.  Wolverine also has a Bamf Enduque on his shoulder. 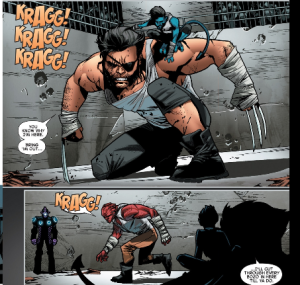 Well the red skinning mutant bamfs towards Wolverine or should I say Patch since that is what the crowd is chanting.  Wolverine then kills the mutant.

Back at the school, Storm is looking for Wolverine who is missing.  She calls Beast who is in space with some of the students.  Beast reminds her that the Avengers are at her call but Storm does not think it’s a good idea to call them, since most of the kids that are there for guidance or because they have nowhere else to go.  Storm is alone except for some of the graduate students who are helping out because Wolverine let all staff have personal leave.  Beast realizes that means Wolverine is AWOL and offers to come back but Storm tells him to stay.

Rockslide is trying to prove that he can do anything; of course, students are making bets that he can’t.  Quentin being a horrible teaching assistant is not paying attention to anything the class is doing. 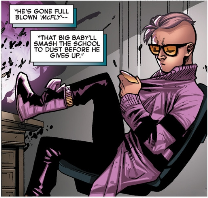 Yea, let me check out my Phoenix button instead of watch the kids

Rockslide breaks through the walls and winds up in the lunchroom.  What did they say he couldn’t do, its obvious breaking through walls is not an issue.

Eye Boy takes Lin’s hand and begins to run away with her but she goes back out there because of the Bamf Enduque’s, I think they are the reason but she can apparently control them. Rockslide stops because he finds the scene with Lin and the Bamfs cute, then Rockslide is flying through a wall outside after being punched.  He naturally lands right next to Storm that is not good for Quentin.

This leads to a fight in the hallway between Quentin and Storm who blames him for what happened.  Let’s be fair it was Quentin’s fault.

Quentin fires back that they are the ones who put him in charge and Strom counters with they have faith in him.  The only reason anyone has any faith in Quentin is because when future him showed up, he was shown to an avatar for the Phoenix Force.  Hellion gets mad that Quentin gets to be the Phoenix and attacks him with his telekinetic powers.  Storm yells at Hellion and then at Quentin to make sure he doesn’t do anything.  Quentin gets mad and storms out through the open wall.  Can we talk about how Quentin was being disrespectful towards Storm, I get it that he got elevated but Storm is still Headmistress.

Wolverine finds out that Jean-Phillipe created The Block as penance for all the people he had killed.  Wolverine tries to convince Fantomex to join the X-Men because they need him and he needs them.  Wolverine is there fighting and killing people so he can gain another teacher, that makes complete sense.  The side of the building is blown open by Evan aka Genesis who is a clone of Apocalypse created by Jean-Phillipe. 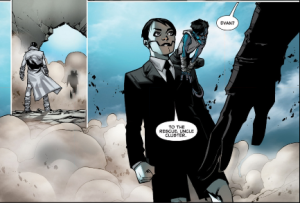 I came here to rescue you

Fantomex is mad at Wolverine for bringing Evan there.  Jean-Phillipe explains to Evan that he can’t leave because he is a bad man who kills innocent people like Evan. 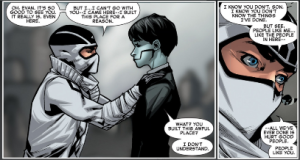 Back at the school, Idie and Quentin are having a moment on the couch.

Hisako aka Armor comes running over to Storm to show her how the Phoenix symbol is on every station and screen. 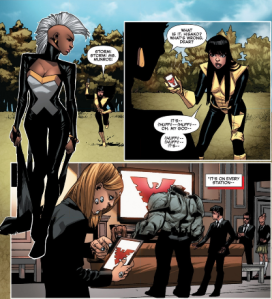 Like with most first issues of a series it started off slow, I thought the same thing about Amazing X-Men #1.  It almost has to in order to give the readers an overview of what will be happening.  I knew that the series was going to focus more on the kids at the school.  I like how they are doing it by having most of the senior staff on leave, thus causing the graduate students to have to step up.  I am curious to see where this will be going, the ending with Phoenix logo everywhere opens up a lot of possibilities.  I would like to see how Storm handles a threat with nothing but kids around to fight.  A part of me wants it to be without Wolverine and another part of me wants Wolverine to be there or at least come in after the battle has started.  I doubt he is going to spend much more time at the Block with Jean-Phillipe being so adamant about not leaving.

Check back with me next month as we see where the relaunch of Wolverine and the X-Men is going to take us.

Posted in Comic Review, Marvel Comics, Wolverine and the X-Men