We are back for the second episode of Gotham, let’s see if they can keep up the momentum from the season premiere.  To check out our recap of last weeks episode check it out here

END_OF_DOCUMENT_TOKEN_TO_BE_REPLACED

What we would like to see on Season 2 of Gotham

After seeing the first episode and knowing some of what they are doing this season, this is some of what I hope to see in the upcoming season.

END_OF_DOCUMENT_TOKEN_TO_BE_REPLACED

Gotham: The Anvil or the Hammer Recap

Well Gotham is almost coming to an end for this season, did anyone else get excited when The Ogre set his sights on Barbara, I am sure we are all hoping that she dies.  Someone else needs to marry Jim and give birth to Batgirl. How cute were Bruce and Selina at the event, they were so adorable, especially when they were dancing, it was a perfect start to their future relationship. Nygma goes crazy and kills the cop that was hurting Ms. Kringle.

END_OF_DOCUMENT_TOKEN_TO_BE_REPLACED

Well Gotham is back from it’s mini break with only 4 episodes left in the season to go.  The biggest thing to probably remember from last season that the Wayne Board is out to get Bruce.  Gordon decided to basically blackmail Loeb, which got him Bullock’s file but no one else from the GCPD.  Now Gordon is head of the GCPD union, thanks to blackmail.

Gordon pays a visit to Bruce who brings him a sandwich that he actually made, I really didn’t know that he was capable of actually making simple food of any kind.  Gordon is smart enough to realize that they know who stabbed Alfred.  He also realized that Alfred plan finding the guy and handling the situation himself.

While at work, a young cop comes up to Gordon asking him to look into a case that had never really been solved and he knows Gordon is the cop to go to.  This proves that Gordon can be sweet talked so he naturally looks into the case.  It seems that she went missing for about four months before she had been found.  Based on the autopsy that Lee redid on the body it seems that she did not struggle or was she abused.  It almost seems like she had been a willing guest, but Gordon is sure that she had been kidnapped. 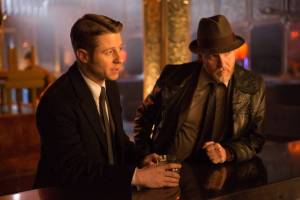 With the help of Nygma and some information from Lee, they are able to find four other bars, speakeasy ones that were not found during the first search.  One of those bars happens to be the right no one because the bartender remembers seeing the victim with a really good-looking guy, well those are her words.  They ask her to let them know if she sees the guy again. 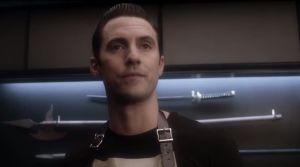 During all to this we get a flashback of the Milo’s character meeting Fairchild at the bar, he gives her a really great line that would get most women into bed. It worked she stayed over but when she tries to leave well that doesn’t go over so well.  It seems that he keeps her there in handcuffs where she cooks and cleans for him, I am guess some other things as well.  Well she had cooked him lamb for dinner and asks him about his day.  Unfortunately, she over cooked the lamb, which caused him to break up with her.  Well if cooking well is prerequisite I would have been killed early on.  His version of breaking up is none other than killing the girls, there has been a few of them.

After Nygma finds a copy of an image that was left at the scene, Bullock realized what was going on.  They are dealing with the work of the Ogre, who will kill any cop and their family if they go after him.  This is the main reason that he has never been brought in.

They are able to figure out after interrogating the cop who gave him the info was forced by Loeb, Loeb is trying to bring Gordon down.  Gordon than proceeds to go after Loeb right in the middle of the GCPD, where Gordon tells Loeb that he is going to find the Ogre and then he is going after Loeb.

The Penguin is trying to get a hold of a restaurant, but the lady does not want to sell.  She does agree if he can get her sweet granddaughter back from the horrible guitar player she is with.  Well The Penguin has the guitar player fingers cut off, that convinces him to leave.  With her granddaughter back the lady agrees to go over terms with The Penguin.  It seems that the only reason that The Penguin wanted the restaurant was because he plans on killing Moroni there. 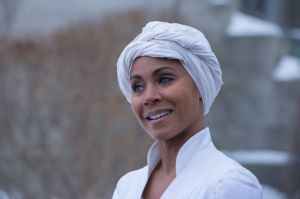 Fish, we are all curious what is going on over there, well she steps outside only to meet with the Catchers who basically tell her that they will kill her the next time that they see her outside.  She then comes up with a plan to get everyone out, she has to get the keys first.  While getting the keys the Doctor comes in so Fish has to convince him that she was trying to kill herself, not trying to escape.  Well Fish sends a bunch of the big guys out first so the Catchers catch them, while she goes back for everyone else.  The Doctor shows up but they beat him a few times before they escape to the helicopter.  The Catcher realize they are trying to escape on the helicopter, the head one shoot Fish right in the side as she is flying the helicopter.

Bruce, well Alfred is back and looking to handle Reggie but Bruce does not want Alfred to go alone since he is not well enough.  This part is true is Alfred pops his stitches and begins to bleed again.  Well Bruce goes looking around gun ranges because that is where he thinks he will find Reggie based on what Alfred said.  Lucky for him he makes sure to send out a few messages looking for Selina who tells him that she could have hit him with a brick, the S&M flirting style they are known for begins, just the awkward pubescent version. 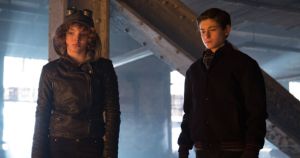 Well Selina realizes where to find Reggie, as she laughs a Bruce for not knowing that meant shooting up drugs.  They are able to find him and Selina takes his drugs and hangs them out the window until Reggie tells them what they need to know.  Which is that some high ups at Wayne Enterprise were worried about what he knows.  Reggie also wants to know if Alfred is all right because he didn’t want to hurt him.  Reggie tells Bruce to let Alfred handle it since these people are much to big for Bruce to handle. Selina is supposed to give back the drugs but she drops them, which causes Reggie to get pissed and threaten the kids.  Reggie sees his drugs sitting on the ledge and reaches over to grab them, Bruce wants to push Reggie out the window but can’t. Selina on the other hand will not let Reggie send people after them and she pushes Reggie out of the window.

One, it looks like Selina is starting to rank up a body count, but if we learned anything Bruce does not punish for justified killing.  He is not able to kill others, but if their death serves justice he does not disown those who do it.  Considering I have seen images of Bruce and Selina together at party, I really doubt he hates her.  Was I the only one hoping that Barbara becomes one of The Ogre’s victims?  Granted it would be a great way to get Barbara and Gordon back together but I am kind of hoping that they will just ignore comics and she doesn’t make it.  Someone is supposed to die this season, granted it’s probably Fish since she is not coming back for next season but we could all hope that it’s Barbara.  Based on the scenes we have seen for the last 3 episodes well The Ogre does set his sights on her.

Until next time, when we get to find out what will happen between The Ogre and Gordon.

Gotham: Everyone has a Cobblepot Recap

Last time, we meet the red hood gang, Wayne board sent a spy to stab Alfred and steal info from Bruce and Fish pulled out an eye.

END_OF_DOCUMENT_TOKEN_TO_BE_REPLACED

Last episode we got to meet the possible Joker, even though they will not confirm that is the Joker. It is possible, since he did have some Joker like moments and even channeled Heath Ledger there a few times. Also Barbara apparently does not find it odd that there are two little girls living in her apt, while she was not there. END_OF_DOCUMENT_TOKEN_TO_BE_REPLACED

Last week, we got to meet daddy crane who is triggering people’s phobias so he can take their adrenal glands. Let’s see if they can figure out what he planning on doing with the adrenal glands, my guess is fear toxin.  While Penguin had to deal with Maroni learning of his betrayal and we are not sure if Fish makes it out-of-town.

END_OF_DOCUMENT_TOKEN_TO_BE_REPLACED

Well Gordon and Bullock got Gruber, which means Gordon is back on the police force, if you want to know more about that check it out here.

END_OF_DOCUMENT_TOKEN_TO_BE_REPLACED

Gotham: What a Little Bird Told Him Recap

Here we are after that pointless two week break, here you want to know more about Gordon’s time at Arkham well check here: Gotham Recap.

END_OF_DOCUMENT_TOKEN_TO_BE_REPLACED

After a brief hiatus Gotham is back, here is to hoping that the rest of this season will have less of Falcone/Moroni and more of new villains.  I am also hoping for a Bruce and Selina reunion just once before the end of the season.  I would like to see more entertaining episodes as less episodes that drag.