Or, as I like to call it, “Keeping Up with the Olympians!”

Opening up on Olympus, Apollo is still trying to extract a vow of allegiance out of the First Born via super crazy awesome torture practices. Apollo is… whipping FB. Which, let’s be real, if kind of a huge step backwards from, say, feasting on his organs as he’s strapped to a dinner table. 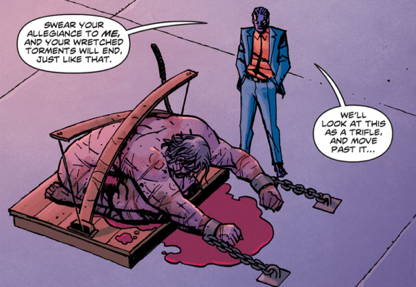 Or being eaten alive by maggots. Remember that time, guys? Haha, good times…

Naturally, his chains begin to crack at the coupling… Because it’s not like shit was made by, I dunno, Hephaestus or anything. Pshaw.

Diana is on Themyscira with Hermes, talking in very disjointed syntax about how she’s failed to protect doesn’t even trust her… So… I don’t know what the hell she’s talking about. Is it Zola? Because I thought that bitch trusted her. Her Mom? Since she’s sitting there, turned to stone in kind of a begging position, SUPER unbecoming of Hippolyta. She’d be more like, “Come at me, bro,” frozen in stone, standing tall, one hand beckoning her attacker forward, the other giving a “Na!” (<- The Greek equivalent of a middle finger.) But I guess I’ll never know because, y’know, bad writing.

Now… Okay, so hold on. I want to talk really quickly about the title of this issue. “The Unsettling Son.” Really, guys? Really? REALLY. Let’s take “Setting Sun” and make it “Unsetting” instead for no reason. Then let’s make “Sun” into “Son” because, y’know, the First Born. Then let’s make “Unsetting” into “Unsettling” because the First Born is a creepster, but now it’s a hugely mangled pun that’s terrible, but we still think we’re clever as all fuck, don’t we? Because that would be the motto of the New 52. “We’re completely unaware of our poor writing. In fact, we’re super proud of ourselves.” In fact, fellow Fangirl Kizerrezik pointed out to me that a whole shit-ton of their books have “DC Comics Proudly Presents” at the top of the title pages. Like they’re trying to convince themselves…

HO-kay. Now. Back to the actual contents of the issue.

Hermes assures Diana that they’ll find baby Zeke, and she reminds him that they’re looking for Zola, too. They zap back on over to Diana’s flat in London, where Hera is sitting on the floor in a corner of the living room that’s been conspicuously left empty… for Drama. 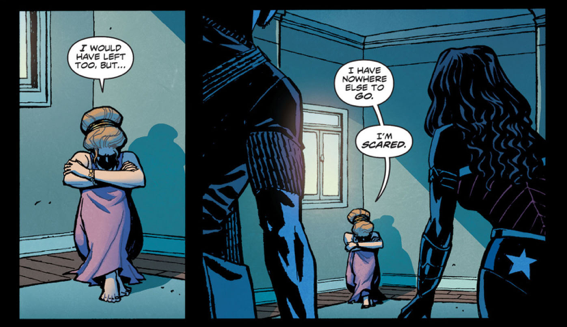 Seriously. Diana’s half-brother or whatever he was… His head is still on the mantle, but they don’t have any, like, bookshelves of shit for that whole wall?

Hera tells them that she’s afraid to leave, afraid of being alone, afraid to die, and that she doesn’t know who to pray to. Diana picks her up and tells her to pray to the only person she can count on to actually help her; herself. Hera doubts herself and Diana realises that they’re going to need some help…

Does this actually tie in to Superman/Wonder Woman, I wonder? Do the rest of the DC Heroes see these mother fuckin’ Olympians just chillin’ all over the everywhere?

Cut to Provence, where Zola is déjeuner-ing with Dio. Zola is more than open to learning to live with the finer things, and Dio welcomes some guests after remarking that she reminds him of someone.

They’re going to go hunting for truffles. Or is that “truffles?” I dunno.

Somewhere over the Alps, Cassandra and her hoverthingy full of goons are still tracking the First Born. <- And I wrote that line before actually reading the page.

Despite her just having said to not go to Provence and that they need to get to Olympus instead, she redirects them towards the south of France when an energy similar to Dionysus’ shows up in London, and then another like it in Provence.

Diana travels to Siberia with a cape on and no pants to combat the cold and ask Snape’s patronus for a boon.

Bitch, it’s SIBERIA. Like she WANTS to be there…

Apparently, this broad is the Moon. And apparently, the Moon is an excellent hunter. And, I guess, Strife made it so that the gods can’t find baby Zeke.

And, it looks like, the Moon’s about to get her ass kicked back to… Not… Siberia?

And then this shit happens.

Diana is beaten by the Moon bear. She submits, despite the Moon telling her that she must agree to a wish of the Moon’s which she will only know when the Moon decides to tell her… 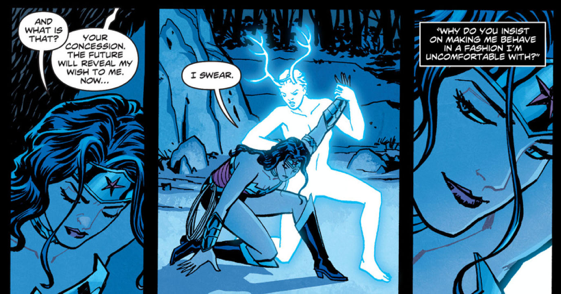 And Diana looks awfully smug here, but I call BULLSHIT. You now owe a glowing god chick with antlers a favour which could be ANYTHING. ANYTHING!

Back on Olympus, Apollo is now using all of his glowy sun powers to give the First Born a helluva shvitz, pouring out water right in front of his face and being a huge dickbag even as he monologues on just how much it pains him to do this to his brother, blah, blah, blah, and how if he just swears allegiance, this shit will all be over with and they can play catch and bake cupcakes and shit. But then… 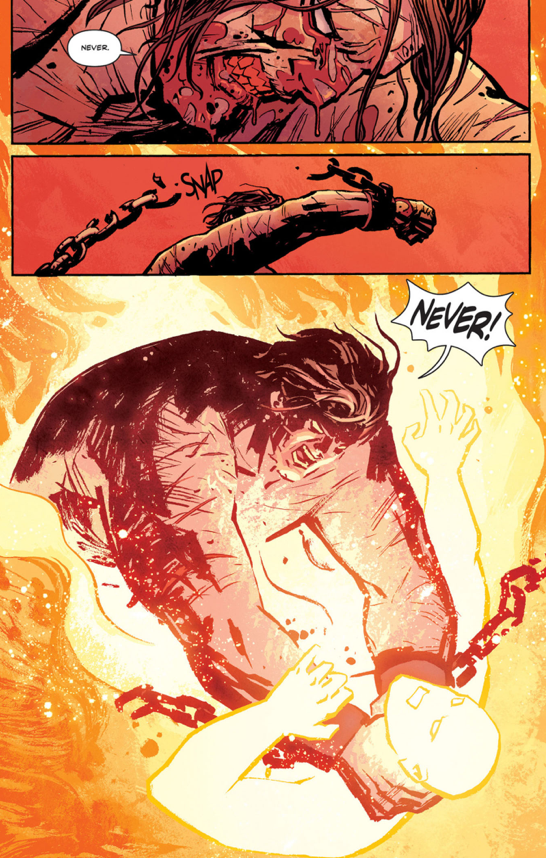 Now, back in the south of France for the last scene, where Dio’s guests are too hot on their truffle hunt and are drunk and starting to strip.

And then THIS happens. 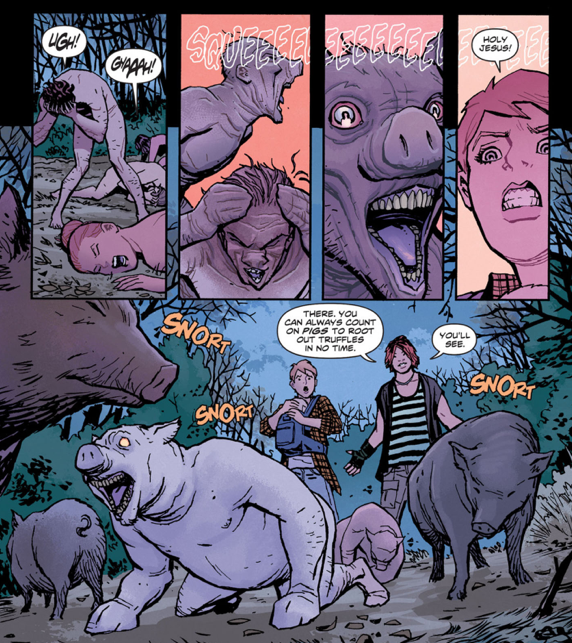 Zola, thank goodness, has the presence of mind to bolt (because, really, wouldn’t you?). Dio, however, almost seems shocked that she’d just up and ditch him. I mean, it’s not like she knew any of these people who’ve just been painfully and graphically transformed into pigs! And, actually, Dio looks more than a little concerned for her.

I feel like I should mention… I’m actually of Greek heritage. I know my mythology. And, in the case of this comic, and specifically in trying to enjoy this comic… That’s not necessarily a good thing. So, this whole thing with the Greek gods playing a major role in Wonder Woman’s story, and her being just another bastard child of Zeus… I’m very much mixed about it. On the one hand, it’s cool to see her heritage and the wealth of mythology being used. On the other, like, five hands, though, we have a Wonder Woman whose origin has been rewritten to make her fundamentally less feminist by virtue of her creation now being dependent on a man, misrepresentations of numerous ancient Greek dieties, shit that don’t make no sense with respect to their characters, the fact that they roam the earth but are either completely ineffectual or invisible or some shit, the fact that it’s getting old, and then… Shit. I forget what the fifth thing was. But, really. I’m just not feeling it.

I love Cliff Chang’s artwork. It’s very clean and very cool. You can always tell every character apart perfectly, and, yeah, they are all designed significantly different, fine. But Diana is drawn like… Like a real person! She’s not a stick-thin bitch. She’s not super bulky. She’s thick. Athletic. Realistic.

And I appreciate that.

Brian Azzarello’s writing, though… I liked him better on Batman.

Or at least someone who writes Diana better. Hell, Peter David does excellent writing for strong women, and he’s always working in weird mystic shit into his story arcs. Let’s fix that broken bridge!

And let’s wrap this shit up already. I don’t think that this is a good enough story to have been following Zola since the first fucking issue. Or, go back and do something more with that whole “Wonder Woman is now the goddess of War” thing. That could actually be interesting!

I guess I should be happy that she’s not handled as poorly as she is in Superman/Wonder Woman.