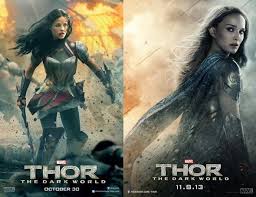 Ever since the Thor: The Dark World came out many people have been divided on whom Thor should be with.  I thought I would compare these lovely ladies to see who might be better suited for Thor.

First, let us look at Jane Foster since she is the main love interest.

What does Jane have going for her?  Well she is smart; she is an astrophysist, (yes I know it is different then the comics where she is a nurse) who does not love a smart woman.   From what I have seen from both movies, she seems like a nice person.  Both Erik and Darcy love her dearly and are extremely loyal to her.  Jane is also very strong willed and determined.  Which can be a very good trait to have, sometimes is has been for her.

While she has some really great qualities most people cannot get over the fact how weak she is.  Thor always has to save her, but that is what most superheros have to do when it comes to their love interests.  How many times has Superman had to save Lois because her curiosity, strong will, and determination has gotten her into trouble?  Just about every episode of a Superman cartoon, live action show and movie.

Granted Lois is the daughter of a general (depending on the lore) so she is not completely useless.  The point is that she still needs to be saved most of the time.  Superman is not the only superhero who has to save his or her love interest: Aquaman, the Green Lanterns, Flash, Wonder Woman, and even Batman.  Jane is just one of many superhero love interest who need to be save by their hero.  She does have some fight to her because she does slap Thor and Loki in Thor: The Dark World.

I know people have issues with the fact that an alien artifact infected her.  Because of that fact, she had to be taken to Asgard, which caused the Dark Elves to come to Asgard.  Many people have issue with the fact that she hid away while Figga, Thors mother fought off the Dark Elf thus getting Figga killed.  I will admit, I did not like Figga dying and really wished it did not happen.  At the same time, Figga did tell Jane to follow everything that she tells her.  Figga knew that they were after Jane and knew that Jane had to be protected.  While I really wish they did not kill Frigga, Jane might have actually been following orders.   Yes, she was somewhat useless for a bit there when they were escaping, but it had been said that she would not survive being a host.  I figured by that part it was taking a toll on her, I can deal with that.

Jane was the one who did figure out how to get them back to earth when she discovered the shoes, keys, and cans from the abandoned building.  She was a huge help during the final battle when she was shifting the dark elves and their leader through the portal.  This was one of those moments where her intelligence was useful.  She obviously loves Thor because she tried to save him from the falling ship.  You have to give her points for actually having feelings for the hero.

Now lets look at Sif, many think she is a much more suitable choice for Thor.

One of those reasons being because she is of the same race.  Since Asgardian’s can live for thousands of years, she would be a much better choice then Jane who is human and will die much sooner.  (We will just ignore that in the comics they did grant Jane immortality and powers at one point to be with Thor.)  Obviously, Sif would be a much better choice because her and Thor could have a long life together.  Another reason is that Sif is a warrior just like Thor.  They have fought and won many battles together.  Fighting in battle with someone does forge a connection and bond.  Sif will have achieved a level of trust that Jane will never be able to obtain.

It is obvious that Sif still has feelings for Thor; in both movies, she was concerned about him.  In the first movie she worried about him getting hurt when he was sent to Earth.

In the most recent movie she definitely tried to convince him join her in having some fun after restoring peace in one of the realms.  Sif, knows that Thor’s has strong feelings for Jane, which is why she helps him sneak out of the castle.

In some ways, I cannot help comparing Sif and Thor to Katniss and Gale.  They just seem to be too much a like with a similar fire.  Having a similar fire can sometimes be very bad causing more issues then anything.  While in many ways Sif does seem like the better choice, she just seems to much like the logical choice.  Another way Sif and Thor are like Katniss and Gale, everyone just assumes they will be together. 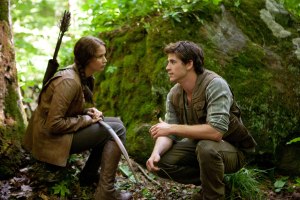 Katniss & Gale: They have the same fire – just to similar.

It is mainly because of this reason why I am slightly Team Thor and Jane.  With that being said, I would not be traumatized if Thor chooses Sif.  There is no amazingly strong connection between Jane and Thor in the movies.  I am sure the connection and bond between is much stronger in the comics since it has time to build and flourish.  In the movies, Sif is such a minor character that I do not feel we know enough about her.  I know much more about Jane then Sif, so it is hard to fully be able to decide which one because in some ways it is skewed towards Jane.  That does make sense since she is the primarily love interest in the comics.  When Thor goes back to Asgard he does date Sif and eventually becoming betrothed to her in the comics.  Both women do play a huge role in Thor’s life and love life.

I am curious what you all have to say on the topic. Are you Team Jane or Team Sif, let us know why.