END_OF_DOCUMENT_TOKEN_TO_BE_REPLACED

I went and saw Catching Fire on Thursday night like the true obsessed Hunger Games fan that I am.  I will admit I was very excited to see the movie; I had been looking forward to it since last year.  It was amazing I really enjoyed it.  I have no problem going to see it again.  Since I am a true obsessed fan, I naturally read the books.  I am going to compare the book and the movie, while the movie was amazing there  were some things missing from the book.

I will admit this has gone through a few different versions because well I talk a lot so I have so much to say.  On the topic, I know not everyone is going to want to read a super long blog. 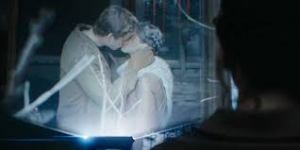 Video of Gale and Katniss kissing. Which only happened about 20 min before Snow’s visit.

Since I am Team Peeta I naturally think, Gale came to the game too late and really did not bring anything of note.  With that being said, the location of the kiss was different.  It was done in town instead of the woods; Gale did not profess anything to her.  He just said that he had to do that just once after it was done and walked off.  It really was uneventful.

Now this scene makes your skin crawl no matter what.  I will admit that the nice thing about the movie is that we are spared Katniss’s descriptions about what she smells.  This scene is very true to the book and is brilliantly delivered by both Donald Sutherland and Jennifer Lawrence.  I did find interesting though, since the kiss and President Snow’s visit happen in the same day how he got that footage so quickly.  They had to have kissed only 20 minutes before hand.

They look so unhappy, this was the worst torture ever.

This one is long so I decided to bullet point it.

The tour starts the same – Peeta and Katniss kissing outside their homes.  I am a bit sad that she did not run into his arms, but Peeta still fell down (something I was worried about since he never lost a leg in the last movie) that helped.  I have to give it up to Jennifer and Josh; they did a great job with the whole Peeta & Katniss tension.  You should just feel the awkwardness.

Gale being whipped was horrible to see. Reading that part sucked, but seeing it was something else Katniss jumping in to save him, followed by Haymitch and Peeta was great.  Then seeing Katniss’s mom and Prim work together to help him was great.  Of course, they added in some extra kissing between Katniss and Gale.  Since I am Team Peeta, I just felt that was completely unneeded. 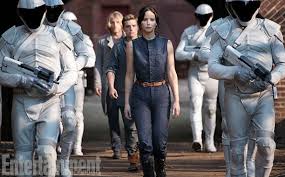 Being lead to the reaping.

The Announcement and Reaping

The reactions from Katniss, Haymitch, and Peeta were so perfect.

Katniss running off into the woods and then coming back to beg for Peeta’s life, perfect.  I appreciate the emotions they had Effie show during this scene.  It would make sense for this to be hard for her since she would have gained an attachment to Peeta and Katniss.  Everyone knew that Katniss was going back into the arena, there is no other District 12 female winner.  Effie looked like she was about to cry reading Katniss’s name, she almost made me cry.

The District 12 tributes for the 75th Hunger Games.

That was done great, Cashmere crying in order to gain sympathy.  Finnick’s part to Annie, I will admit I did not believe.  Joanna, that was great, she just seemed so over it.  Her being so mad about Katniss’s wedding dress was perfect.  The wedding dress and the spin into the mockingjay dress was great.  If you read the book, you had an idea in your head and it did not disappoint.  Peeta’s announcement about the baby, Josh Hutchinson did a great job.  His smirk after the announcement was perfect.  All the victors holding hands at the end showing a united front was perfect. 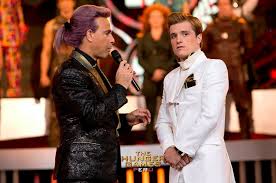 It would be alright if it wasn’t for the baby.

This was honestly the best part of the movie – done so perfectly.

Katniss being brought up in the hovercraft was well done.   This part is interesting because you see all these horrible ideas that Plutarch had come up with when it came to Katniss and the arena, that you naturally think he is on President Snow’s side.   There he is in the hovercraft talking about the rebellion.   I think the movie did a great job of throwing the audience off with that.  Katniss attacking Haymitch after finding out about Peeta was great, Jennifer Lawrence and Woody Harrison are great together this part made me excited for Mockingjay (those who have read the books will understand).  There is a lot of speculation about what Katniss says as she is being drugged – I would to hear what others thought they heard.  Katniss waking up and Gale telling her that District 12 was destroyed was amazing.  The hurt and rage on Katniss’s face – I have to give it up to Jennifer Lawrence again on great facial expression.

Missing from the movie was the one with the 2 people running away toward District 13.  Without that interaction, there was no need to Katniss to check the tapes and notice how they do play the same footage about District 13 every time.  I think this will shock the movie audience to know that District 13 exists and to find out about it, since it is never mentioned in the movies.  I will admit I did not miss this part at all.

Extra scenes; most of them I liked, the ones with President Snow and his granddaughter were great.  She helped show how much of an affect Katniss was really having.  The scenes with Plutarch and President Snow, I loved – it really helped to emphasis how much Snow hates Katniss.  I could have done without all the extra kissing scenes between Gale and Katniss – I am Team Peeta.

Overall, I really liked the movie and to me this was a better adaptation the first one.  I think they hit all the key points and things that were left out really did not take away from the story.  This time I felt, while they did anticipate that most of the audience read the books this time, instead of leaving things out.  This time I felt that they tried to make the audience feel what they felt when they were reading the books.  I had read the books and the movie still did a great job of shocking me, it drew me in and made me forget about some of what was about to happen  I really enjoyed this movie a great deal more then the first one. I am really happy that Francis Lawrence will be directing the next 2 movies.

I am a film person, as in I have a Master’s Degree in it.  I understand adapting a book to script can be hard.  Not everything is going to make it in. What makes a great adaptation is that all the important things are put in to the book fans are not left wanting more.

I hope you all enjoyed my review of Catching Fire, please check back for the second part when I compare the differences between the characters in the book and movie.

Until part 2, may the odds ever be in your favor.

Here is a mini treat: Joanna stripping down in the elevator

Peeta, what are you doing?

I just can’t stand this outfit

Is this chick serious?

Hello Joanna, it is good to see you again.