I would like to apologize for taking so long to write the second part of this blog, but I was doing NaNoWrimo for the month of Nov.  For those of you who do not know what that is – well you write 50,000 words of a novel in a month.  Crazy right, I did it last year and won, unfortunately I cannot say that about this year.  I really did try, the other fangirls can attest to that.  That happen to take my attention last week.  I do apologize to those who were waiting for this blog to come out.

Now onto the blog, in this installment of Catching Fire: Movie vs Book, I would like to look at the characters and do those comparisons.  Especially with the introduction of a few new important characters such as Finnick, Joanna, Beetee, and Plutarch, I will start by looking at old favorites first.

Obviously, we need to talk about her, she is kinda important to the plot and the movie.  I think they did a good job with showing how she is more damaged now.  In the movie, she spends more time alone in the woods, which is something she does in the book.  Granted in some ways I do not feel there was not that much change in her personality from the first movie to this one.  In some ways, I did not feel that way about the books as well.  As I mentioned in the previous one I do appreciate what attempts they made to show her PTSD.   In doing that, they did a great job of showing her vulnerability, which is definitely one of the biggest changes in Katniss.  She would have never asked Peeta for help or to stay with her. Katniss’s reaction to Peeta “dying” was perfect and really shows how much she has come to care about Peeta. With all that being said Jennifer Lawrence does a great job playing Katniss, she portrays her hard edge while at the same time playing the vulnerable emotional Katniss as well.

Peeta and Katniss as they enter the training arena

I love Peeta, Team Peeta all the way.  Since the books are told entirely from Katniss’s point of view, it really gives the movies a chance to do more with some of the characters.   All the others characters are all well developed in the books, but the movies are able to take it a bit further.  With that being said, I love the edge they put on Peeta.  He is suppose to have one because like Katniss, he was affected by what he saw and did in the games.  He is affected by what the Capitol and President Snow is doing to them.  At the same time, he is still Peeta the guy who has loved Katniss since he was 5.  The sweetness of Peeta comes out when he gives her the pearl and the locket.  Because of this I would have loved to have seen the picnic on the roof top.  Josh Hutcherson really does a great job with this, he has said many times in interviews that he loves playing Peeta because they are similar and it comes out.

I would like to say that I love Woody Harrelson as Haymitch, he does a great job with the character.  In this movie you get some more in depth with Haymitch.  His hated of the Capitol, the fact that he does care for Peeta and Katniss and more of his wisdom, but with the movie cutting out some things you don’t get the full extent.  Without learning how Haymitch won his Hunger Games, you don’t learn what happened to him as a result you don’t find out the reason why he is a drunk.  While there are some things that are left out, the movie does a great job with that they do show.  You really get to see Haymitch’s investment in saving Peeta and Katniss this time because he knows they can survive.  As I said Woody Harrelson really does a great job with this character, especially with the drunk aspect.

They really added more to Effie; I think even more then what the book.  She is snippier and has some amazing comments.  One of my favorite moments is when she tells them to smile and add that she is talking to Katniss.  It shows how well she knows the both of them.  The movie also showed how much she cares for them, by showing her reaction during the reaping ceremony; she looked like she was going to cry.   I have to say I really enjoyed the extra’s that were put into movie.  Of course Elizabeth Banks does a wonderful job playing Effie.

The movies really do their best to play up Gale, since he is so underplayed in the first 2 books.  Liam Hemsworth does a great job with Gale, I have always been Team Peeta and even while watching the movies, I am still Team Peeta.  I do appreciate that they keep Gale true to who he is in the books.  I do appreciate that Liam actually did get whipped for the whipping scene.  I think it is because of that it helps make that scene harder to watch and actually makes you feel for Gale.  The movie does a great job of showing how much Gale cares for Katniss.  I still think he came too late to the game on that one, but while watching the movie I really get the impression that he cares about her.  I really didn’t think he cares about her when I am reading the books.

Donald Sutherland is an amazing actor to begin with so it is no surprise he is amazing as President Snow.  The scene where President Snow visits Katniss at her home is amazing.  Donald Sutherland and Jennifer Lawrence play off each other so well.  The scene when Snow shakes his head telling Katniss she failed was just perfect.  You really dislike him, just like you are suppose to.  The extra scenes that were added in help emphasis this point, especially the scenes with Plutarch were perfect.

Cinna and the Prep Team

I just love the prep team they are hilarious.  Lenny Kravitz is great as Cinna, he comes off as someone who it not really “Capitol.”  The movie does under utilize the prep team and you don’t get to see their attachment to Katniss like you do in the books.  The movie does a great job with Cinna.  I was crying during the scene when they beat him.

Willow Shields, I love as Prim, she does a great job with the character.  Prim comes off with some more edge to her and an amazing understanding of what is going on.  That is different from the book at least to me, I felt that Prim was still a bit more naive in the books.  I did love seeing the scene where Prim helps the mom heal Gale after the whipping, it really shows how much Prim knows and her maturity.  Which makes me excited to see what they are going to with her in the next movies.

For our new characters: 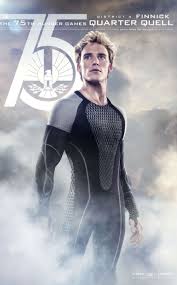 I am not in love with Sam Clafin as Finnick, do not get me wrong I liked Finnick.  Sam Clafin did a great job, especially with the sugar cube scene.  He definitely has the flirtatious nature down.  He has the hard edge and annoyance with Katniss’s attitude down.  I think I even flipped him off while watching the movie.  I have so say his relationship with Mags was great though.  I could see the bond between them, which made it even more tragic when Mags dies.  I remember not liking Finnick as much in this book as I did in the third one.  Looking at it from that point of view, he did a good job.  There just is something that I am not feeling with him, I hoping that will be fixed for the next movie since I love Finnick in Mockingjay.

I will admit when I first heard they cast Jena Malone as Joanna I was like the girl from Saved.  I was nervous since Joanna is one of my favorite characters.  Jena Malone nailed it, she does an amazing job, I didn’t like Joanna until the third book and I was loving her in this movie.  She hit all the right aspects of Joanna and none of it seemed fake.  She played Joanna with the indifference and anger that is needed to make the attitude and bitchiness come off.  The elevator scene was amazing; Jena Malone did a great job with that.  As well with the interview scene and the scene where she yells at the capitol during the games.  I really hope they go into why she is the way she is in the next movie since they did not in this one.

Beetee during the training arena

I have to say I love Jeffery Wright as Beetee, he plays him so well.  It really comes off how brilliant he is.  His calm nature is amazing and it does come off how much he cares for Wiress, that they are friends.  I am super excited to see the next movie since…. well I won’t say for those who have not read the book, but all of us who have read the books will understand.

Plutarch and Haymitch at the Capitol Party

Phillip Seymour Hoffman is great in this role, easily.  In the books, this character is very under developed since he has very little interaction.  I do love how the movie gives him the extra scenes with President Snow.  Those scenes were great because it shows how well Plutarch can manipulate the Capitol.  He understands how the game is played and based on those scenes you would never know that he was a part of the rebellion.

I wanted to mention her because even though she does not survive this movie, if it was not for her Katniss would have never figured out what the arena was a clock.  I have to say Amanda Plummer did a great job with the role, I knew she would since she played crazy in So I Married an Ax Murderer.  I liked Wiress in the books and I liked her in the movie.   Amanda did a great job of playing the slightly unhinged Wiress during the arena, “Tick Tock, Tick Tock.” I was sad to see her die at the hands of Gloss.

Again she deserves a mention because if it was not for her sacrifice Finnick, Peeta, and Katniss might have been killed by the acid fog.  Lynn Cohn did a great job as Mags, instead of mumbling when she talked she just mimed everything.  The way it was done, I am really alright with that change it seemed very fitting.  The relationship with Finnick was beautiful.  She came off as a lovable grandmother.  Which made her sacrifice at all the more tragic, I really fine with the fact they did not show her death to be painful.

I hope you liked my Catching Fire blogs, be sure to check out my first one if you have not done so already.