Game of Thrones: The Wars to Come Recap

After our very nice long break Game of Thrones is back, I know we are all very excited. I am rather excited, since I know this will be the combination of books 4 and 5, a lot happens. I know a lot always happens, but a lot more is going to happen. As always I will do my best to recap without giving anything away.

I guess I will do the recap by region/family.

The show starts off with a flashback, which I am sure confused people, I was actually confused until I remember about Cersei visiting the witch. Cersei cuts her finger so that the witch can tell her fortune by tasting her blood, this is some serious magic.

Well Cersei finds out that she will be Queen but not to whom she thinks will be King. While she will be Queen, someone younger and more beautiful will come and cast her away (Margaery?). She is told how she will have no kids with the King, he will have 20 but she will only have 3 all with crowns of gold. Maybe that is why Cersei got into the whole incest thing, you know because she was kinda told that would be her life. 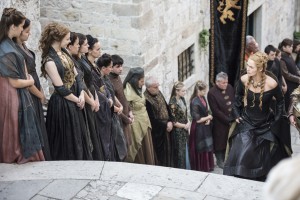 Well Cersei is walking up the temple steps to where her father is has been laid to rest, while Cersei walks up she throws some massive shade/side eye at Margaery. Well Jaime is watching over his father’s body, can we please talk about those stones with the eyes painted on them, were they creeping anyone else out. Well Cersei accurately accuses Jaime of being the one to let Tyrion out. While Jaime thinks that everyone is plotting against them, he is more than likely right because everyone kind of hates the Lannisters. Cersei thinks their only enemy is Tyrion. Once Cersei was done ripping Jaime apart and told him he had a hand in killing their father she walks out of there, I am guessing we will not be seeing much of Jaime and Cersei.

While at the funeral, Cersei is pretty much drinking her way threw it and ignoring most of the people there. She does have a chat with Lancel, who has found religion and forgiveness for helping kill Robert and he time spent in Cersei’s bed. He does plead for Cersei to all find religion but she well laughs and continues drinking.

Well Loras is having a good old time with his lover Olyvar, but Margaery just barges right on in. She really has no problem with walking in on her brother.  It makes me wonder how many times she has just walked in on her brother.  Well, Olyvar leaves and has no problem being naked in front of Margaery, but Loras does not seem to mind being naked in front of his sister. Margaery is there because she is hungry and they are keeping the king waiting.  Margaery is hoping that Loras would be more discreet but he doesn’t care because everyone already knows it is not like he will be marrying Cercei now that her father is dead.  He does have a point because we all know that Cersei was completely against marrying Loras.  Margaery on the other hand, well she is stuck in Kings Landing with Cersei.

In the middle of no where in Westeros:

Brienne is all hostile because well Arya did not want her help and she is taking it out on poor Podrick.  Pod is doing everything that he can to be the best squire that he could be.  He really wants to be a squire and Brienne on the other hand does not want to be a knight or a leader.

Littlefinger has sent Robin Arryn off to be trained, wow he is horrible, I think I could do better.  What else can we expect from a kid who was breast-fed until he was; was he ever stopped?  Well Littlefinger and Sansa are leaving him there in hopes that he will be trained, well more so that he will safe.  Well Sansa and Littlefinger ride past Brianne and Podrick in a carriage, wow Brianne is failing at this find the Stark girls.

Jon is beating up a young recruit, I think the one that killed Ygritte, because well he needs training.  Things are a bit awkward around there because one they do not have a new Lord Commander, I am happy that everyone still has a chance to see that, because well you will see.

Gilly is all worried that they will send her away with the baby, Sam tries to tell her that he goes where she does, but she than reminds him that they will kill him.  Yea, sorry Sam you can’t run away with Gilly, also Gilly had a point why are you not training.  I know you think you are all badass since you kill a white walker and stuff but Sam, you should still train.

Well Jon gets called by Melissandre up to the top of The Wall for a meeting with Stannis where Melissandre is eyeing Jon up and down.  I don’t blame her, it’s Jon Snow.  She also makes sure to ask if he is a virgin, well we all know where her mind is going.  Stannis offers to give the Wildlings citizenship and lands if they fight in his army.  Jon has until sundown to convince Mance to bend a knee to him.

Well Jon talks to Mance, I have to give it to Jon he gives a good speech, but there is no way that Mance is going to bend a knee.  In front of everyone, Mance refused to bend a knee so they burn him like a witch.  Well I will give to Jon, he walks away and shoot Mance in the heart because he could not bare to see him struggle against the fire.  It was a horrible sight to see, if people accuse him of being partial to the wildlings for that, they are jerks, it was horrible to watch.

Well Tyrion is freed from the box that he had to be held in the whole time.  I love how they touched on the whole bathroom thing, Tyrion did not like having to push his poop through the hole but The Spider liked throwing it overboard even less.  Well Tyrion does a great job of drinking and puking on an empty stomach only to keep drinking.  The whole reason The Spider saved Tyrion is because he thinks that he will be a great help in getting Khalessi onto the throne. Varys gives Tyrion a choice he can drink himself to death where he or go meet Khalessi, Tyrion wants to know if he can drink himself to death on the road to Khalessi.

Well naturally we had to see what was going on with her, well she is having issues in her new city.  She is pulling down statues and they are killing her Unsullied that visit brothels.  It should be noted that the Unsullied really just wanted her to cuddle with him and sing to him, awww so cute.

Well it seems that some of the people are not happy about the changes that have been made, while they will accept no more slavery they do want the fighting pits back open.  Well Kahlessi is not having this, really did we think that she was going to be all right with that.  Well her new man Daario, tells her that she should open the fighting pits back up. He tells this great story how he would not be a free man today and with her had it not been for his time as a slave in the those fighting pits.  He was also smart and told her all this after a romp in the bed, nothing makes people more open-minded and relaxed than sex.

Also super cute moment between Missandei and Grey Worm, she wants to know why an Unsullied would go and visit a brothal and he tells her that he does not know. I have a feeling he does and wants that with her.

It was a nice first episode back, we got to see what was going on with a few of our favorite characters.  I know we are still wondering what is happening with Arya but previews have shown that we will find that out next episode.  It has been some time since I have read books 4 and 5 so some of the little things I do not remember anymore, as far as I can remember there was not a lot changed in the episode. I do know what is suppose to happen to our characters and many of them have a wonderful and exciting journy ahead of them. We also have some great new characters to meet, I am still upset that one of my favorite characters from the Dorne is currently not going to on the show.  There are a few other new characters who are very important that we should be meeting either this season or the next one.

New Game of Thrones Trailer and News About Winds of Winter

A lot of Game of Thrones news has broken out today, the first one being the leaked trailer from Season 5:

I won’t go into a lot since I know what happens, but the trailer is good, it shows just about everyone, we know that this season will not have Bran.  I did like the glimpses of the Sand Snakes, Prince Oberyn’s daughters, they are amazing characters.  Still upset that my fav character from the Dorne will not be in this season.  As you can see there will be some things happening at The Wall.  Tyrion has been taken somewhere safe by The Spider.  Arya has also found a place to go.  Cersei will be dealing with her father’s death and Margery well I think we all knew that she was going to become Queen again.  There will be a lot happening this season as they start-up books 4 and 5. 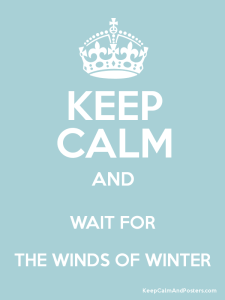 I don’t know how much longer I can keep calm

Speaking of the book, it looks like we will be waiting another year for Winds of Winter.  George R. R. Martin’s publisher has said that the book will not be out this year.  There is a lot going into the book, most writers put this much work into 3 books apparently.  Anyone who has read the books can a test to how much information is put into each one.

While we wait we will be getting 3 prequel novellas: The Hedge Knight, The Sworn Sword, and The Mystery Knight.  While having these novellas will definitely help past the time, I really want Winds of Winter. Soon I am going to forget what happened in books 4 and 5.  I am hoping that we will see Winds of Winter in 2016, because then the show will be getting close.  The only good thing is that they have at least 3 season with books 4 and 5, that gives George R. R. Martin this year to get it done.