Here we at another episode of Gotham, last week was a rather interesting episode because there was a man killing corrupt cops because someone needed to and he didn’t trust the system. I find it interesting how many of the people in Gotham know that Gordon is a good guy.

END_OF_DOCUMENT_TOKEN_TO_BE_REPLACED 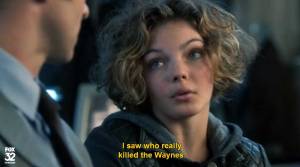 END_OF_DOCUMENT_TOKEN_TO_BE_REPLACED

Here is it the series premiere of Gotham which we have all been waiting for, well I know I have.  I am super excited for this, I am hoping they don’t disappoint.

END_OF_DOCUMENT_TOKEN_TO_BE_REPLACED

There is a first look trailer out for Gotham, where they give us some more footage of the show but also explain more about it.

I will say this, every trailer or video I see for the show looks amazing so I am really hoping that the show looks like this for real and that its not just some amazing editing job.  Here are somethings that they went over in this video that I really like.

I think if they writers and creators keep going the way that they are this show could do really well.  It already has an amazing following just from DC alone.  Everyone knows that Batman is the bread and butter of the DC universe.  It was smart for the show to include little Bruce Wayne as a cast member.  I think this show has a lot of potential to do really well.

What did you like about this video? What are you looking forward to the most?

‘Gotham’ spotlights some of the villains

In a new short clip from Fox’s Gotham, they spotlight Catwoman, The Penguin, and Fish Mooney.

The clip is short but it does tell us that young Selina Kyle, Oswald Cobblepot and Fish Mooney are going to major villains.  I am not sure if it’s for the whole series or if it is just for the first season. I’m pretty is it will be for the whole series, well maybe not for Fish Mooney since the Penguin works for her.  At the same time it is nice get a slight idea how these villains are going to be worked into the series.  We already know that The Riddler and Poison Ivy are also going to be in the series and have already been cast.  The Riddler is working in the forensics department of the Gotham PD.  Fish Mooney is a business women/crime boss in the city.  The Penguin is one of her low-level thugs, it looks like she sends him out to do some of the beatings.  Young Selina Kyle is just a little thief that should not be cornered.  It looks like Gordon and Bullock might have their work cut out for them with this crew.  There is still talks of bringing in the Joker which could also mean seeing Harley Quinn.  As well all know there is a long list of Batman villains still left to be introduced.  I am very interested to see how they put this all together.