Why Beast looks human in Day of Future Past stills.

We have all seen the stills and a trailer for the new X-Men: Days of the Future Past movie.  While the stills and trailer look good, I have had a question (a few actually) about the movie – why is Beast human?  I am sure we all remember in X-Men: First Class, Beast taking a serum that instead of controlling his mutation actually accelerates it thus causing him to become blue and furry.

What I know from various other X-Men incarnations and the comics, um Beast stays blue and furry.  Ok, except for when he goes green, scaly, and furry – I think most of us would like to forget this version existed.

Many faces of Beast

Then why is he in human form in some of the stills for the movie?

An argument can be made that he is using a hologram, which has been used in the X-Men cartoons, but that was also in the 90’s not the 70’s.  While Beast is super smart and can build anything, I am not sure he could have built a hologram in the 70’s, the tech for it probably doesn’t exist.  Lucky for us we don’t have to wonder anymore, Nick Hoult who plays Beast has given us an explanation:

“What’s happened up to this point is between the time of the last movie and this movie my character has created a serum which basically controls his mutation so his appearance is normal as long as he doesn’t get worked up. Any animal instinct or urges, that kind of brings him out. So yeah, he changes into Beast a few times throughout the story and they’ve done some great action sequences with him this time, particularly in the mansion flying around on these chandeliers and stuff.” – Nick Hoult

Is that why he is blue in this scene?

Basically Beast is now the Hulk only blue, I don’t know about anyone else but I am not fully feeling this idea.  Beast is supposed to be blue and furry, that is a part of the character.  More importantly is important to the character’s growth, Beast learns to come to grips and accept what he is and he learns to be “Mutant and Proud,” did anyone else hate that line from First Class?  Beast learning to accept his new form is pivotal to his character, the same as it is for the Thing in Fantastic Four.  By making it so that Beast can control his form and only ‘Hulk’ out into it is doing an injustice to the character and making it hard for him to be “Mutant and Proud.” 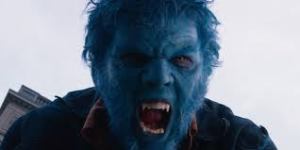 Beast all Beasted out

What are your thoughts on the whole Beast being able to control his form?

Posted in Marvel Comics, X-Men, X-Men Days of the Future Past