Anyone who follows the comics knows that the main Black Canary was Dinah Laurel Lance, with the death of Sara earlier this season and with Laurel training with Ted Grant who does help train the Black Canary, I think we all knew where this was going. Here are the first images of Kate Cassidy as Black Canary

Her outfit is a bit different from her sisters, Sara Lance’s Canary was a but more sexy and much closer to the look of the Black Canary as we know her.

Laurel’s Black Canary outfit is much more tactical, it is sexy but in more of a Catwoman sexy then the bodysuit and fishnets that we are used to when it comes to Black Canary.  I am sure the fishnets are very impractical because they probably snag and rip on everything.  No word yet on the Canary Cry, unsure if Laurel will be using her sisters sonic device or if Laurel is somehow going to become a meta human.

What do you think of the Black Canary costume?  Are you looking forward to Laurel taking on the mantel that we all knew she would?

If you want to learn more about the amazing costumes of Black Canary check out Kizer’s blog Costume Dynamics: Black Canary.

Posted in Arrow, the CW

What We Would like to See Happen on ‘Arrow’

After a very interesting season premiere I thought I would go over what we would like to see happen this season on Arrow.

END_OF_DOCUMENT_TOKEN_TO_BE_REPLACED

Here we are the season premiere of Arrow, it has been an interesting first two seasons.  Let’s recap what happened in the season finale, well after an epic battle for Starling City that left many dead, team Arrow with the help of the League of Shadows was able to take down Slate Wilson.  Wilson is behind bars in the cell underground located back on the island.  Sara has gone back to the League of Shadows because that was the agreement they made when she asked for their help.  Detective Lance is a detective again but he was dying from internal bleeding on the pier.  Thea was pissed off at everyone especially Roy so she left town with her father Malcolm Merlyn.

END_OF_DOCUMENT_TOKEN_TO_BE_REPLACED

OR, “Some of This Shit Just Ain’t Worth It”

Rather, it’s a list of books which I’m dropping, and subsequently will no longer be reviewing, and why.

Some of you may have noticed that I haven’t been reviewing certain books for the past couple of weeks. There are a multitude of reasons for that.

So, let’s just get this shitstorm started.

This book started off extremely poorly with issue number 0. It was awful. Every attempt at breaking the fourth wall was an exercise in Mary-Sue-ness, which is never okay in the world of The Fangirl Perspective.

But, really, I’ve sat down with the next two issues, intent of reading and reviewing each of them on this website, but… I just can’t get through them. They’re not funny. They’re not entertaining. They’re not even interesting. And, probably the worst of all, Amanda Conner and Jimmy Palmiotti are insipid as the writers.

Issue number 2 featured Poison Ivy helping HQ out, and I’ve always loved the Harly & Ivy moments in every medium, but this just fell flat. Like everything else in this series so far.

Even the puns aren’t punny enough.

The charm of the Harley & Ivy relationship was that it was more subtly. This gets almost explicit, which I don’t inherently mind, but this comic is just full of shit being thrown in your face. There’s no nuance. There’s no subtlety. There’s no cleverness. It’s brash and blunt, and that may be part of Harley Quinn’s character, but it’s not good writing in and of itself, and certainly not if there’s never a break from that style.

I feel like every moment of this comic is “THIS IS A JOKE. HAHA, FUNNY, NOW YOU LAUGH.” That’s not humour. That’s your drunk uncle yelling in your face when you refuse to respond to his latest racist joke about black folks, while your black friends are sitting with you at Thanksgiving dinner. I’m not saying that this comic is racist, but I am saying that it’s about the same delivery from two sets of people who clearly think that they’re hilarious… And they’re not.

Also, there are so many elements to the budding story that just don’t make any kind of sense…

So far, I just really hate this character. Every time I see her, I want to barf.

In fact, although I read the first issue, I don’t think that I can stomach posting any kind of preview image here and sully this blog thusly.

Per the first issue: She’s a junkie who found the Joker’s severed face in the sewer and took it as a sign that this was her calling, to be his heir. She’s obsessed with the Joker. With proving herself to him. But her brand of crazy is just… Gross. It’s mass murder, it’s rambling inner monologue which does little to instill ay sort of emotion in the reader, it’s obsessive, yes, but it’s not the Joker. The Joker, no matter how evil he is, no matter how much you may hate him, there is something about him that is lovable as a character. Just ask Doctor Harleen Quinzel of Arkham Asylum. He’s clever and spontaneous.

So, that’s a big part of why I hate this character, aside from the sheer ick factor. It’s an attempt by DC to capitalize on the popularity of it’s most famous villain, but it’s neither a good execution nor an admirable idea in the first place. So, even before it’s really started, and unless something truly remarkable happens with this character, I’m done. I’ll keep an eye on things, but I’ll spare you, dear readers.

Y’know… I think that the new Batgirl series is alright. I miss the shit out of Stephanie Brown, and I do think that they made a mistake in retconning out Oracle, one of the most amazing characters ever created in the history of comics. “Birds of Prey” is kind of the case is point for that. Without Oracle, the cast feels unbalanced. And since it started out as such a departure from the pre New 52 series, and left so many of those plotlines hanging, this series just feels like a monthly slap in the face. Couple that with the fact that I have no attachment to these characters, and it’s pretty fucking problematic.

Although the read had been fairly interesting until the recent revelation of Earth 2’s identity (I’m not gonna post a spoiler here, just know that I thought it was pretty lame), I feel like Red Tornado Lois Lane and Aquawoman are pretty weak reasons to keep reviewing this book here. 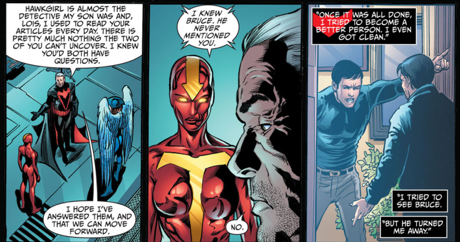 And where did Hawkgirl come from? DID I MISS AN ISSUE?!?

Now, don’t get me wrong. I love Lois Lane. She’s one of my all time favourite characters in comics. It’s nice to see her featured in a book, since she’s not getting any love in any of the Superman books (pun kind of intended… with malice). BUT, she’s not the Lois that I love. The Lois that I love is not super-powered. She’s just scrappy as fuck, and that’s what was so remarkable about her character. Give a normal human character remarkable abilities in a universe where super powers are a dime a dozen, and I feel like you’ve actually taken away what was so special about her in the first place.

Aquawoman, I really have no ties to as a character. I just don’t feel compelled by these characters.

HOWEVER. I’m not dropping Earth 2 completely. Rather, I’ll be adding it to a list of comics for which I’ll be doing bullet reviews. I want to at least wait until a Lois/Clark reunion and see how that plays out, what with her not really being Lois Lane but rather her consciousness downloaded into an android and him being super mind-controlled by Darkseid and currently an agent of Apokolips.

I’m not dropping this one, either. It’s just gonna get a monthly bullet review along with Earth 2. I’m just not that much of a fan, since I never really got into her character, and a lot of stuff in this series doesn’t make sense, particularly in BW’s private, civilian life. In fact, we’re going to briefly address this in our next podcast, so be on the lookout for that around Valentine’s Day.

Sigh… Okay. I was really torn on this one. My first instinct was to drop the series completely, but I felt a marked improvement in the Zero Year issue. That said, I’m hoping that this series will improve, and so I’ll be doing bullet reviews of this one as well, at least for the next few months.

As DC continues to cancel some series and greenlight other, new titles, I’ll be checking back in to let you nerds know where I stand on them, if they pertain to a strong female character. For now, let’s get on those bullet reviews for issues I haven’t reviewed yet; check back for those tomorrow or the next day.