There is a first look trailer out for Gotham, where they give us some more footage of the show but also explain more about it.

I will say this, every trailer or video I see for the show looks amazing so I am really hoping that the show looks like this for real and that its not just some amazing editing job.  Here are somethings that they went over in this video that I really like.

I think if they writers and creators keep going the way that they are this show could do really well.  It already has an amazing following just from DC alone.  Everyone knows that Batman is the bread and butter of the DC universe.  It was smart for the show to include little Bruce Wayne as a cast member.  I think this show has a lot of potential to do really well.

What did you like about this video? What are you looking forward to the most?

Photos from the set of Fox’s Gotham

We have some great first look pictures from Fox’s Gotham. Filming for the show began this week, we are very excited for these first look photos.

The first one shows Ben McKenzie as Jim Gordon and Robin Lord Taylor as Oswald Cobblepot aka The Penguin. I like the way McKenzie looks as a young Gordon. I am interested to see where they are going with The Penguin. I am pretty sure in lore he was born looking like a penguin and these pics he doesn’t look anything like one.

The next pic is of Gordon and Donal Logue who plays Harvey Bullock. I like the look of Bullock, he looks like he could be an older and rougher around the edge cop. I can definitely see him hiding a flask in his coat. There is an official character description of Bullock.

“Jim Gordon’s partner and mentor, the rough-around-the-edges Detective Harvey Bullock plays loose with police procedure, but gets results — and he does so with old-school, hard-ass panache.”

Here is the official image of Bullock alone; I have so say I am really liking this image.

Next, we have the official image of Camren Bicondova as Selina Kyle aka Catwoman. I really like the look of her. She really reminds me of a young Michelle Pfieffer. I really like how they positioned her so it almost looks like she has cat ears – great foreshadowing. 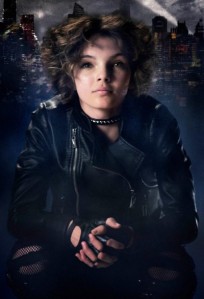 Next, up we have some great photos of David Mazouz who is Bruce Wayne aka Batman and Bicondova. I like the look Mazouz in Bruce’s school uniform and I love the pic him wearing the Batman mask. I like the action shots of Bicondova, she has the possibility to get that Catwoman stealth and slink down. I like the goggles because they remind of Catwoman’s current costume. I also appreciate that she is stealing milk. I really like the picture of Mazouz and Bicondova together I hope that means that we will be seeing Bruce and Selina together on the show. 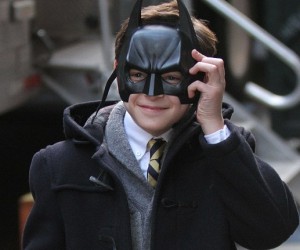 Then we have a few pictures just of McKenzie, I will admit that it is weird to see a young Gordon when I am use to older look.

Gotham will air on Fox this upcoming fall season.