END_OF_DOCUMENT_TOKEN_TO_BE_REPLACED

Here we are at the second of Gotham, but I enjoyed the first episode it was great to get a feel for the characters and to meet most of the main players.  The Penguin betrayed Fish who betrayed Falcone, Gordon “shot” The Penguin.  Bullock is a dirty cop and a drunk but we already knew that.  The Wayne’s were killed and Gordon plans on doing everything to bring their killer to justice.

END_OF_DOCUMENT_TOKEN_TO_BE_REPLACED

In honors of Father’s Day, the ladies of the TFP wanted to spotlight some of our favorite dads in the DC and Marvel Universe.

END_OF_DOCUMENT_TOKEN_TO_BE_REPLACED

Character photos have been released for Gotham: 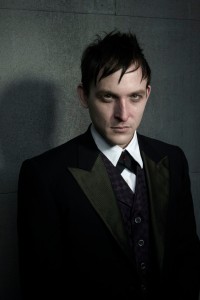 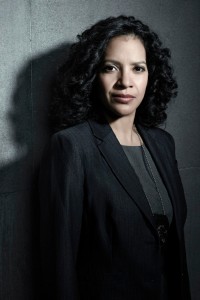 What do you think of these pics?  Do you think the show has been casted well?

I personally think they did a great job casting the show, without knowing who is playing who I would be able to tell by most of the pics.  Since there are not many images of these characters younger, the show did a good job of picking people who could look like a younger versions of their character or an actor who played that character.

You will be able to check out Gotham on Mondays before Sleepy Hollow this fall.

Fox has released more images from the set of Gotham.  We have another image of Selina Kyle, this time with a cat.

I knew they were going to have to show her with a cat or cats at some point, I just did not expect them to do it with release photos.  I am happy to see this image, Bicondova claims to be a lover of cats, so that will be a great asset to her.

The next set of photos we have are the infamous death of Thomas and Martha Wayne. 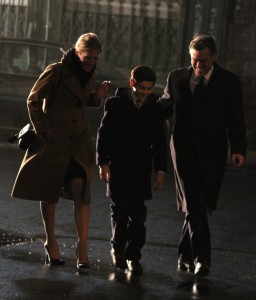 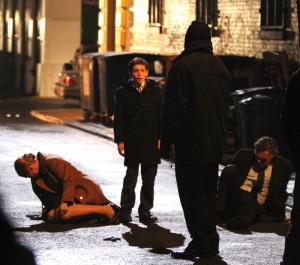 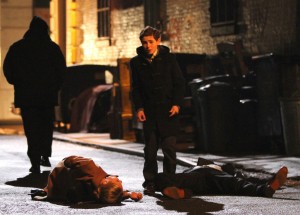 While I am happy we got to see a photo of him with the parents, I think the first one with them walking or one with him crying over the dead bodies would have been enough. The photo of the parents falling and the last one with them on the ground just do not do the scene or story justice.  If you are person who lives under a rock or really young you might not know how Bruce’s parents die.  In these stills it does nothing to explain why Bruce was left alive.  In the last still it looks like the shooter is walking away.  I was always under the impression the shooter got spooked and ran away that is why Bruce was left alive.  Maybe they are going with a different approach or maybe the stills are doing a bad job of showing the shooter running away.  I guess we will have to wait and see once the show airs. 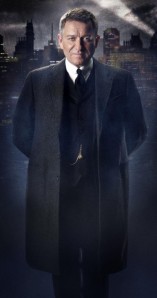 I like his look, this is what I would expect an English butler to look like.  I am just waiting to see what approach he will take – will he be stiff or friendly.  Will he act like a traditional butler or will he act like someone who has raised Bruce from infancy?

What do you think of these new set photos?

A synopsis and logo for Fox’s Gotham

Gotham has released the logo and official synopsis for the upcoming TV show. Let’s check out what they have to say:

“Everyone knows the name Commissioner Gordon. He is one of the crime world’s greatest foes, a man whose reputation is synonymous with law and order. But what is known of Gordon’s story and his rise from rookie detective to Police Commissioner? What did it take to navigate the multiple layers of corruption that secretly ruled Gotham City, the spawning ground of the world’s most iconic villains? And what circumstances created them – the larger-than-life personas who would become Catwoman, The Penguin, The Riddler, Two-Face and The Joker?”

“GOTHAM is an origin story of the great DC Comics super villains and vigilantes, revealing an entirely new chapter that has never been told. From executive producer/writer Bruno Heller (“The Mentalist,” “Rome”), GOTHAM follows one cop’s rise through a dangerously corrupt city teetering on the edge of evil and chronicles the birth of one of the most popular super heroes of our time.”

This part we already knew about, we knew the show would deal with mostly with Gordon and a young Bruce Wayne. We also knew that we would be seeing some of the iconic villains only younger.

“Growing up in Gotham City’s surrounding suburbs, James Gordon (Ben McKenzie, “Southland,” “The O.C.”) romanticized the city as a glamorous and exciting metropolis where his late father once served as a successful district attorney. Now, two weeks into his new job as a Gotham City detective and engaged to his beloved fiancée, Barbara Kean (Erin Richards, Open Grave, “Breaking In”), Gordon is living his dream – even as he hopes to restore the city back to the pure version he remembers it was as a kid.”

I like this part; we always knew that Gordon was an idealist, which is what made Gordon who he was. Much like Batman, Gordon believed that Gotham could be saved, which is one of the reason’s why he teamed up with Batman in the first place.

“Brave, honest and ready to prove himself, the newly-minted detective is partnered with the brash, but shrewd police legend Harvey Bullock (Donal Logue, “Sons of Anarchy,” “Terriers,” “Vikings,” “Copper”), as the two stumble upon the city’s highest-profile case ever: the murder of local billionaires Thomas and Martha Wayne. At the scene of the crime, Gordon meets the sole survivor: the Waynes’ hauntingly intense 12-year-old son, Bruce (David Mazouz, “Touch”), toward whom the young detective feels an inexplicable kinship. Moved by the boy’s profound loss, Gordon vows to catch the killer.”

In the Batman Begin’s movie, Gordon was one of the cops on duty when the Wayne’s were killed. He is one of the first people to comfort a young Bruce Wayne. Having Gordon vow to catch their killer will be a great way to connect Gordon and Wayne throughout the series. I like the description of hauntingly intense for young Bruce Wayne because they seem like a very Batmanesqe description. We all know that once Bruce’s parents are killed he stops being a child anymore.

“As he navigates the often-underhanded politics of Gotham’s criminal justice system, Gordon will confront imposing gang boss Fish Mooney (Jada Pinkett Smith, The Matrix films, “HawthoRNe,” Collateral), and many of the characters who will become some of fiction’s most renowned, enduring villains, including a teenaged Selina Kyle/the future Catwoman (acting newcomer Camren Bicondova) and Oswald Cobblepot/The Penguin (Robin Lord Taylor, “The Walking Dead,” Another Earth).”

It says that Gordon will run into these characters, which makes complete sense. I really hope Bruce runs into Selina, because I would love to see their interaction evolve. It would be so cute and innocent to start and then evolve into something more provocative and sexy. I have been shipping Batman and Catwoman since I was a little kid watching Batman Returns in theaters, I have been shipping them the longest. They did say Selina is a skilled pickpocket, she could very easily pickpocket Bruce Wayne, I am just saying.

“Although the crime drama will follow Gordon’s turbulent and singular rise through the Gotham City police department, led by Police Captain Sarah Essen (Zabryna Guevara, “Burn Notice”), it also will focus on the unlikely friendship Gordon forms with the young heir to the Wayne fortune, who is being raised by his unflappable butler, Alfred (Sean Pertwee, “Camelot,” “Elementary”). It is a friendship that will last them all of their lives, playing a crucial role in helping the young boy eventually become the crusader he’s destined to be.”

I am interested in seeing how the friendship between Bruce and Gordon plays out. I could see it being pivotal in helping Bruce becoming Batman. Gordon is a good detective and probably in the comics has figured out that Bruce Wayne is Batman, if a young Tim Drake can do that, then I am sure Gordon can.

I like the synopsis; I know the show obviously will not be exactly like lore because of how they are doing it. I am expecting something similar to Smallville. The logo looks great, it looks dark and gritty which is how Gotham needs to look. I am wondering if they are going to go with Joe Chill not only being the person who killed Bruce’s parents but also being the Joker. That is one of the possible origin stories for the Joker. Let’s be fair no one knows the Joker’s actual age.

I am very curious to see how this show goes.