Here we are back for another thrilling episode, Jon is now the Lord Commander of the Nights Watch.  Arya has been taken into the House of Black and White, Tyrion is on his way to Khalessi, Jaime is on his way to get his daughter, and the Dorne wants to kill all Lannisters.

Cersei is on her way to attend the wedding of Tomman and Margaery, the people love Margaery.  After this rather quick wedding, I guess no one wanted to eat in case of another poisoning.  We find Margaery and Tomman in bed together, okay we all know what happens on a wedding night, if it wasn’t for the show aging up Tomman, he is like 12 maybe and Margaery is like 18-20, ewww. 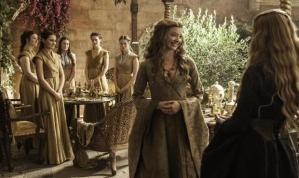 Margaery is a master at manipulation of men, she basically makes Tomman not like how protective his mother is of him. The next day Tomman asks his mom if she wants to head back to Castley Rock, but she doesn’t because she wants to say there with him.  Cersei had to realize that Margaery had something to do with it and pays her a visit.  Margaery was just regaling her cousins about how much Tomman wants to have sex all the time, well yea he is like 12.  After a bit of talking, you know the usual Margaery Cersei banter Margaery asks Cersei what should she call her now, Dowager Queen or Queen Mother.

Other goings on in the capital, well the Sparrows, the religious sect that Lancel is a member of.  They go and grab the High Septon from the brothel where he was choosing which of the 7 that he would bed.  They made him walk through the streets naked as the day we was born.

Cersei visits the place of the Sparrows so she can meet the High Sparrow, the man who started it all.  He does not think that he is anything great, all he is doing it teaching others to give to each other and take care of others.

Cersei’s guy Qyburn is pulling a Doctor Frankenstein in his dungeon, hmm I wonder who he is working on.

Ramsey is telling his father how he is flaying some of the Northerners in order to make them loyal.  Roose makes is son stop eating as he tells Ramsey that he cannot control the Northerners by flaying them.  Since Ramsey is now officially a Bolton, he has found him a suitable bride.

Littlefinger has taken Sansa to Moat Cailin, because the marriage arrangement he set up was for her, not him.  It is in her best interest to marry Ramsey Bolton, otherwise she will always be hunted down by the Lannisters.  Sansa agrees to head down there and meet Ramsey.

Now we all know Theon is there, well he makes sure that Sansa does not see him, either Ramsey told him too or Theon remembers some of his life as Theon.  Well neither Sansa or Ramsey are all that thrilled with this but Ramsey knows it is the only way to hold the North.

Roose is concerned when Littlefinger gets a letter from Cersei, Littlefinger assures Roose that he is not in allegiance with them, he knows to keep his enemies close.  Littlefinger also made sure to threaten Ramsey if he ever harms even a single hair on Sansa’s head well Ramsey is not going to like it, I guess Rasmey’s exploits have gotten around.

While Sansa was getting set up in her room, her chamber maid lets her know that she is happy to see her and that “the North Remembers.” It seems that it was the right idea to bring Sansa in.

Brianne and Pod have been following Sansa and Littlefinger this whole time.  They are taking the long way around because they won’t be seen but also because Brianne knows where they are headed.  Brianne asked Pod about himself and she apologizes to him about always being so short with him.  She agrees to start training him how to be a knight, she might not be able to knight him but she will teach him to fight.  Also it was such a cute story about how she became the guard of Renley, the fact that he was the only person who was nice to her during her ball.

Jon is doing his job at the Lord Commander, Stannis tries to convince Jon to join up with him and help take the North, but Jon declines he is the Lord Commander now. Just like Stannis is still hoping the Wildlings will join up with him, but it might be a problem since he killed their leader.  Jon also lets Stannis know that he needs them to leave because he cannot afford to keep feeding everyone.

Jon is dolling out tasks to the men of the Nights Watch, but Janos is not having it, he does not care what Jon says.  Well Jon, he is the Lord Commander, so he has Janos taken outside, this is when Janos freaks out and cries because he does not want to die.  Janos than says that he is afraid and always has been. Jon being the Stark that he is, takes his sword and cuts off Janos head.  This is when the men of the Nights Watch learn that Jon means business. 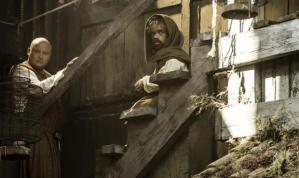 Tyrion had to get out of the carriage, so Varys let him out but only as long as he has a hood on.  While they are there, they see a Red Woman, well she is not really red not like Melissandre but a priestess of the Red God, preaching.  For those of you who have seen The Wolverine or Arrow, she should look familiar.

Well they take Tyrion to a brothel because well its Tyrion and where else would you take him.  While he is there, he tries to get with one of the prostitutes but he can’t seem to get it up.  I guess what happened with Shae really messed him up.

Well Tyrion goes out for some air, which seems like a good idea until well Sir Jorah shows up, because I guess Sir Jorah is looking for that money or an in back to Westeros.

The House of Black and White:

Well Arya is unhappy sweeping the floors, she want to learn how to be a faceless man.  Her buddy tells her that she is not ready to learn yet, the reason is because she has not shed her Arya Stark life.  Arya takes everything that she owns and throws it into the river.  Well all except Needle, that gets placed under some rocks, good because there was no way she could part with Needle.  It is after that Arya is allowed to clean off a dead body and begin her training.

This was a good episode, I have been looking forward to seeing Jon as the Lord Commander, power sits very well on that man. If you thought Jon Snow was hot before, just you wait an see.  I had forgotten how Tyrion winds up on his journey until Sir Jorah kidnapped him.  I promise you will enjoy the journey that those two will be going on.  I am really happy they are combining books 4 and 5, because book 4 was really boring, there was a lot of politics and not that many characters that you really liked.  Honestly, Jon, Sam, and the people of the Dorne were the most interesting stores during that book.

The Sansa storyline is completely different, she never left the Vale in the books, so I have no idea what is going on here.  I am beginning to think that the theory that they are turning her into Lady Stoneheart might be accurate.  It will be interesting to see where that goes, because they would obviously show more with that storyline then.