← Gotham: The Scarecrow Recap
The Flash: The Nuclear Man Recap →

Them. They. They that are them. Those guys.

Wait. Who are we talking about?

Maybe those bastards who produce the show..? 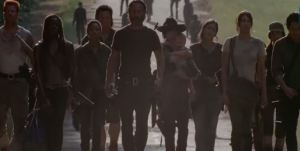 Anywho. Let’s get on with the recap:

Maggie, naturally, mid crying over the loss of her sister, taking. Brief break to down a walker. Daryl is eating worms. Sasha is is following a dried out creek, looking for water. She finds a bunch of dead frogs (which all still look very plump, and frogs dry out very quickly, so is this a sign of something significant or poor art direction?). The bang keeps going down a road, bemoaning their lack of resources, and Maggie probably shouldn’t have been wasting water with all of those tears. And even as their spirits are down and things look bleak, it does look like Maggie and Sasha are bonding a bit over heir shared pain from the recent loss of a sibling.

After the opening credits roll, the van they’re using runs out of gas, leaving them to walk the 60-ish miles to Washington. Daryl seems closed off again, making a remark about Li’l Asskicker being hungry before stalking off into the woods at the side of the road to hunt. Carol follows him, which, hooray. I love Caryl. (See what I did there?) 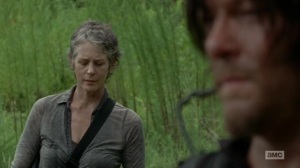 “Why did I kiss him on the forehead?! Damn it, Carol, ya choked AGAIN.”

Carl gives Maggie a music box with a tiny blonde ballerina that he found, because you really can’t fucking stop Beth’s songs, and “Father” Gabriel tries to comfort Maggie… And, as I wonder why they’re keeping his shady/useless ass around, she tears into is happy ass, throwing his cowardice into his face. 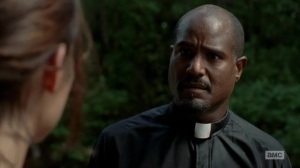 Damn, girl. Tell me how you REALLY feel.

Since the group is just running on fumes, they opt to deal with a mini herd by luring them to an overpass and simply flinging them off. Unfortunately, Sasha takes that moment to fly off of the deep end. Michonne and her share a rather tense moment.

The group come across a bunch of cars in the road and go about searching them. Maggie finds a car with what look to once have been a young female in the process of being kidnapped, bound and gagged and walkerized in the trunk because why not?

As the group is resting, a pack of once-domestic, turned-feral dogs come at them, but Sasha’s my-coping-method-is-use-of-excessive-force ass is on that shit, and it looks like they’re at least eating tonight.

Of course Eugene chews with his mouth open…

And Gabriel puts his press’s collar into the campfire.

Maggie, Sasha, and Glenn are pushing people away, and poor Glenn is just trying to keep everybody hydrated. Daryl goes off into the woods for the third time and finally allows himself to cry, but only after going super emo, burning himself with a cigarette and never bothering to brush the hair out of his eyes. 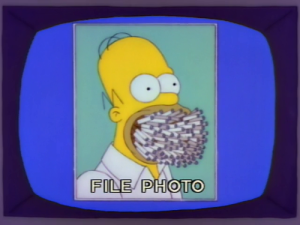 I don’t have a screenshot of him in this scene, so bear with me.

Several gallons of water are just left in the road for them with the note “From a Friend” (MORGAN?! Wait. Nope.) but the argument of whether it’s a trap or not proves practically moot when a massive thunderstorm rolls in. Gabriel apologizes to God. Unfortunately, the storm may just be too big, because they’ve got to haul ass to outrun it. Of course,there was totally a cabin in the distance in the scene where Daryl finally cried, so the hole up in there. And Rick gives the world’s worst pep talk, but he does finally name drop the show, which certainly made some nerds “squee.”

I feel like, given how fatalistic Maggie’s been this whole episode, maybe a barn wasn’t the most sensitive of choices to stay… Oh, look. A herd of walkers come to knock the doors in.

Somehow… They survive. And Daryl even has time to clean out the music box so that it works again. And so, Maggie wakes Sasha and the two of them, Sasha armed with a semiautomatic rifle and Maggie armed with… Well, apparently, with the music box, venture out to discover that the storm caused copious amounts of damage, leveling most of the forest around them and taking out the walkers, but leaving that rickety fucking barn miraculously untouched.

But, then, as the two of them watch the dawning of a new day (METAPHORS!), that’s exactly the point. It’s supposed to give them hope.

Even as a spic and span and totally comfortable looking stranger approaches them, proclaiming himself a friend and asking to speak with their leader, Rick.

Also, I love how they both turn away from the potentially imminent threat to look at the delayed reaction of the music box point. C’mon, guys. 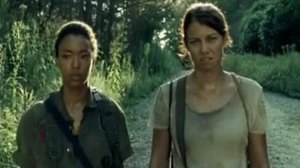 Jeez, ladies, get it together.

All in all, this was another classic all talking episode. The kind of makes you wonder whatever happened to the zombie threat.

Go ahead. Tell me I’m wrong.

Also, it makes you wonder why you’re watching the show, but then they did that thing again, where they introduce a new mystery in the last 10 seconds of an episode, thus ensuring that you will return for more self punishment next week.

Also, Rick’s beard is out of fucking control.

See you next week!

← Gotham: The Scarecrow Recap
The Flash: The Nuclear Man Recap →