We open on Sasha Fierce– a fierce Sasha axing a pew. The others are also taking apart the church, picking parts of the interior apart to fortify the exterior. Rick, Daryl, Sasha, Tyreese, and Noah head off to Atlanta to bring back Carol, leaving Michonne, Carl, Li’l Asskicker, and the Priest to hold down the fort, even as the latter is having a hard time with the shambles of his now blood-splattered church.

Probably should’ve gotten that blood out right away if you didn’t want it to soak into he wood, bro…

In the world’s worst road trip, Tyreese tries to comfort a stoic Sasha…

At Grady, Beth is catching glimpses of a still out cold Carol…

And on the road, Team GREATM (Glenn, Rosita, Eugene, Abraham, Tara, and Maggie) are still dealing with a comatose Mullet, a borderline insane Ford, very little water, and a massive hoard in the distance.

Back in Atlanta, Rick lays out a plan, one which Tyreese clearly doesn’t like. It involves luck and murder, neither of which is enough for him to keep his faith in the plan. He counters a covert mission of stealth with one where they basically ambush the hospital’s officers and negotiate a trade. Rick is confident that his loan will work, but Daryl backs Tyreese’s idea. With the uteri of millions of Fangirls at his back, Daryl, of course, wins.

In the church, Carl offers the Priest some sage advice from his years of experience, but Gabriel is less than enthused about taking on walkers.

In the hospital, Beth overhears a conversation between cops about how Carol isn’t doing so hot. Beth doesn’t like what she hears and contents them, but Dawn tells the officer to shut down the machines. When the officer leaves, she blames Beth for making her make that decision, but then presents her with the opportunity to save Carol behind their backs, giving her the key to the medicine cabinet.

On the road again with GREATM, as Glenn, Tara, and Rosita go for more water, Tara defends the Mullet’s actions, saying that she can’t blame him for wanting to survive. A ways away, still on the road, Maggie very angrily creates a little lean-to to keep the Mullet out of the sun and tells Ford to suck it up because they’re all going to have to move on.

Does the carpet match the drapes or is Ford’s colour out of a can?

In Grady, again, Beth meets with the only doctor in the world, asking him for medical advice on Carol’s condition, and he quickly realises that Dawn have her the key, and then questions their commander’s motives. He tells her to put Carol on an epinephrine drip to normalize her blood pressure and wishes her luck.

Girl, I need you to wake up. And not die.

At a creek, Glenn, Rosita, and Tara have built a crude water filter to collect some freshwater, Rosita explaining that Eugene had shown her how to do it. She tells how she met Ford and the Mullet, and the Glenn gets distracted by fish because, well, food.

In Atlanta, as a pair of Grady officers “track down” Noah, Rick and company ambush them and the officers realises that Rick was also a police officer. Suddenly, another Grady ambulance peels in and as the officers dive in, speeds off under heavy gunfire from our crew. They don’t get far, though, as Sasha tears their tires apart, leading into a tussle in a charred FEMA lot between Daryl and a cop. Daryl’s weapon of choice while being strangled? Well, jam two fingers into a walker’s eye sockets like a gooey little bowling ball, rip its head off of its body, and slam it into your attacker, of course! Oldest trick in the book. As Rick arrives, ready to kill the officer, Daryl talk him down, saying that the extra captive will be good. 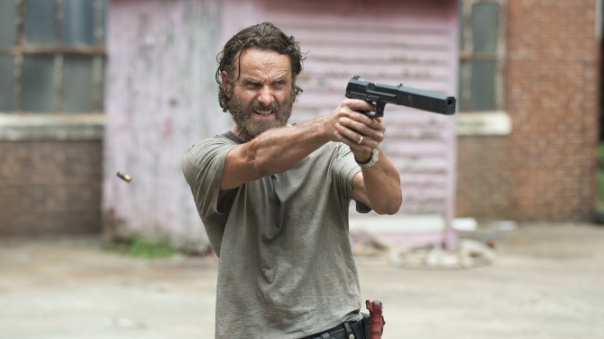 Rick, as always, is rocking the crazy.

One of the officers talks about how their plan won’t work, as there’s a mutiny in the works at Grady, but the cop who recognizes Rick’s former profession wants to help them out, since he’d rather shit went down peacefully. He claims to know Dawn very well, and gets an audience with Rick.

On the road again, Glenn and company cut the netting from the jacket linings of some walkers to form fishing nets, and Tara comes across a gold mine in a muddy backpack… And by a gold mine, I mean she. Has a yo-yo to pay with.

Now, legend has it that the yo-yo was originally invented by the Chinese as a weapon, so I had better see some pretty fucking amazing take-downs with that thing. You know. Chekov’s yo-yo.

Walking the dog… Right through some brains!

Back in the church, Michonne talks to Gabriel, trying to get him to understand that, though their actions may seem barbaric, they have a purpose. Gabriel doesn’t want her advice… Because he’s too busy locking himself in a room and prying up floorboards…

At Grady, as a patient fakes a coughing fit, Beth sneaks into the cabinet, steals her supplies, starts Carol’s IV, and speaks a few words of comfort.

Tyreese confronts his sister about her loss, and tells her that she, at least, got to be there and say goodbye. She hugs him, and it’s real sweet, as walkers who are half pudding but still active wheeze about five feet from them…

At the church, Gabriel has broken through to the crawlspace, unnecessarily escaping and leaving a gaping point of entry into the church, as well as stepping on a nail and giving himself tetanus and a bleeding wound to make a delicious trail for the walkers to follow.

The officer willing to cooperate, who we now know as Bob but who I’m going to call ReplacementBob, has his powwow with Rick. Sasha hears and approaches him and he goes into a story about having recognized a “rotter” who he new as “Tyler.” He was supposed to drive as van full of survivors from Grady to the FEMA evacuation zone, but Dawn put Tyler on it, and now he’s one of the walkers half-melted into the street. Sasha offers to help put Tyler down, like her new purpose is to be the Kevorkian of TWD since she didn’t kill Original bob herself.

On the road, Maggie asks Ford if he wants her to shoot him. He admits to not wanting to die, and the Mullet awakes in that moment. And the others return with water and fish.

Sasha and ReplacementBob say goodbye to Tyler by sniping him from the window of the warehouse… Only for ReplacementBob to rush her and slam her into the window, knocking her out and leaving him to take quick but tiny, little steps out of the building.

Because he’s not ReplacementBob. He’s…

So, I feel like this episode try to accomplish two things; make Beth a useful person in the eyes of the viewers, and make us not hate the mullet. I’ll give Beth some credit because now she has some medical knowledge, just like her father before her, but hopefully she doesn’t end up being decapitated… Unless, of course, she starts to sing again. Then, whatever will be will be.

However, I do not, nor do I possess the capacity to conceive of a universe where and I will care for the mullet as a character. Oh, well, la dee da, he can make a crude water filter. Well, guess what? I bet you Daryl could as well, as he would have needed that is a basic survival skill, right up there with chowing down on squirrel meat and making necklaces out of human ears.

Until next week, when they raid the hospital, and try to make me feel feelings… That midseason finale always comes with a dramatic death, and I’m super worried…