Here we are back for another episode of The Flash; 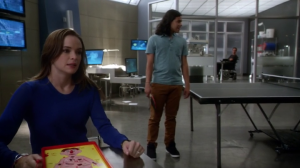 One of the highlights of Barry gaining powers means that he gained friends. Barry is running around the lab playing ping pong with Cisco, operation with Caitlin, and chess with Wells. They want to check his ability to multitask, which makes sense because it probably helps if you can multitask as a crime fighters. After Barry lost chess to Well, which I am sure that is rather easy to do, Barry gets called over to a robbery that is happening.

Barry does his thing at the robbery but the robbers get away. Barry does run the van driver to the hospital. When Barry comes to the crime scene as Barry, Detective West mentions how they do not have much. It seems that Barry was able to see one of the robbers faces when he pulled up his mask. Well I guess that Barry is finally coming in handy have these super powers of his. Detective West has Barry check out a suspect book where Barry is able to identify Leonard Snart as one of the robbers.

Iris does her best to bribe her father with some coffee but Detective West is not happy about her dating Eddie. It did not help that Eddie tried to talk about dating Iris earlier.  Iris wants Barry to help her with her blog about The Streak, but Felicity comes because Barry did not visit her when he come to Starling City.  Felicity let Barry know that she knows about his powers because she heard everything through the com system.

Snart is unhappy about Barry stopping his plan because he had spent the time studying the cops and their response time. When one of his guys questions Snart about his plan which causes Snart to kill him.

Snart visit a museum because he wants to steal a rather large diamond, this is reminding me of Batman and Robin, yes I know I just referenced that horrible movie.

Iris convinces Felicity to come out with her, Eddie, and Barry on a double date.  They all go out to trivia where Felicity dresses to nice for but she looks amazing in her dress.  Barry gets a call and has to leave, Felicity covers for him.

Detective West is almost taken out by a police car because Snart froze the ground with his ice gun.  Barry takes the hit for Detective West but it causes Barry to get third-degree frost bite, this unfortunately messes with Barry powers.

Earlier Cisco realized that the freeze gun that he created to stop Barry incase something went wrong is missing.  Wells rips Cisco a new one about this, I thought that Cisco was going to cry.  Barry was hurt that the Cisco created a weapon to be used against him but at the same time they did not know who Barry was.  Cisco should calm down because Batman will come up with a different way to stop the Flash later on.

Felicity is really a help in this episode because she tells Barry how long it took for Team Arrow to become a well oiled machine.  She also yells as Cisco and Caitlin later on when they listen to Barry and stay out of things.  Barry needs their help and the support of his team now more than ever.

Snart steals the diamond, but since he has learned that Barry weakness is saving people he derails as train in the process of getting away.  I have to say Barry does an amazing job of saving all the people in the train, I really wish CW did more clips of their shows like the other stations do, because this is amazing to see.  Team Flash does listen to Felicity; Cisco and Caitlin show up with Felicity in tow threatening Snart with even bigger gun that will counter his gun.  They basically want him to leave The Flash alone and give back the diamond.  Snart leaves but he does not give back the diamond, it really should be noted that he was threatened with a vacuum cleaner with glow lights.

Barry pays a visit to Felicity as she is taking the train back home were they basically say how they would both be perfect for each others but they both want someone else.  It is a great moment that does involve a kiss, which I am was pretty excited about and I am sure many others were as well because those two would be so adorkable.

This bonus scene does not involve Wells but instead Snart talking with someone else about how they should team up and this person does fire.  I am wondering if that is suppose to be Firestorm since we have already meet him.

Honestly, Felicity made this episode, it would have been good without her but it was made better because of her.  It was a good episode it was we always love it when we can see character from lore, it was nice to see Captain Cold. More importantly is was nice to see that he will be a reoccurring character on the show.  Most everyone else has pretty much been stopped by either death or lock up, it is nice to have a character that is still out and can cause problems. I do find the whole Eddie and Detective West thing funny, because Eddie wants to talk about his relationship but can’t because well Detective West does not want to hear it.

Now I will give this message out to everyone, it is National Novel Writing Month which means that I will be writing 50,000 words of a novel this month.  Since that is happening it will probably cause so of the recaps to be late and shorter. If the shorter things is working for all of us then they might continue to be a thing.