Once Upon a Time S4E6 – “The Snow Queen” PLUS Another Reference to Marvel? 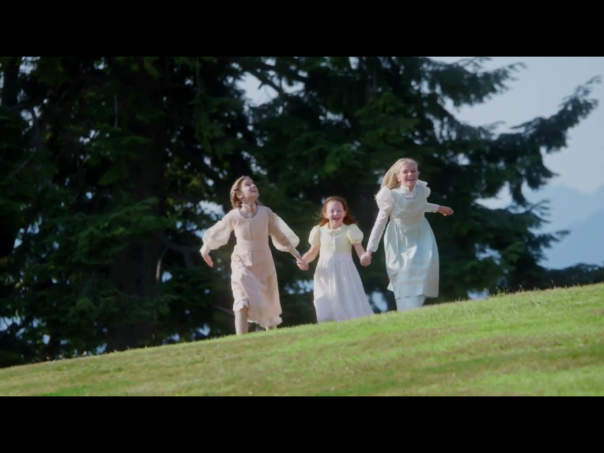 I’m way more concerned about Ingrid than the kidnapper, frankly. That bitch crazy.

The episode opens with a young trio of sisters (Ingrid, et cetera) frolicking about a lush hillside, chasing a kite, which gets caught in a tree and torn. A man suddenly decides to kidnap and ransom them, but young Ingrid’s powers manifest in that moment and she accidentally kills the man. As she freaks out, her sisters still take her side and decide to keep her secret. They split the ribbon of the broken kite and claim it as a symbol of their sisterhood. Also, super crazy about young Ingrid being that little psycho Lizzy from “The Walking Dead.”

In another flashback, with the girls as adults, w see that Ingrid has locked herself away like Elsa did, from a gala wherein Helga hares a dance with what looks to be a younger Duke of Weaseltown. Ingrid sneaks downstairs, superbly underdressed, and watches her sisters dance with their suitors, bringing about a few flurries. She leaves.

After the party, Ingrid plans to bolt, but Helga tells her to shut her fool face because they’re always going to be together… And Gerda pipes in that she’s heard whispers of a magician from Mist Haven who might be powerful enough to control Elsa’s powers. Three guesses who that is. 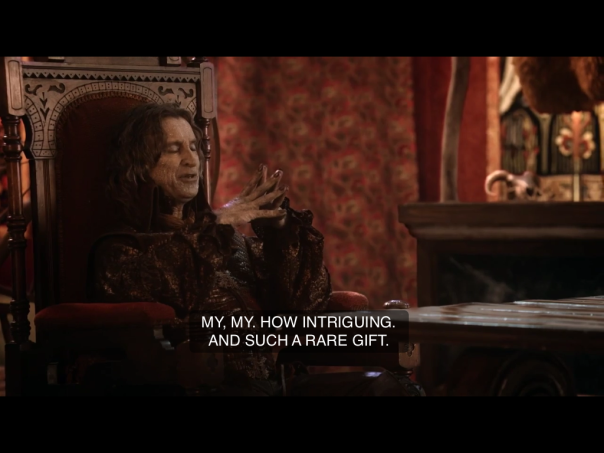 He’s not as scaly as he eventually gets, though, so hooray for continuity.

They meet with Gold, who tells her that the sisterly bond and True Love are all the help that she really needs. After all, love is free, but all magic comes with a price. He gives her some fancy gloves, which she questions, and then hands her the urn as a last resort, if things should ever get out of hand. In exchange, he wants them to hand over their ribbons. He says that sometimes objects imbued with enough love can have a power all their own, but the other two sisters don’t want to give their ribbons up, saying that theyll take care of Ingrid. Ingrid, however, is ready to sacrifice their symbol of sisterhood…

(Because she’s a bitch.)

Little Duke of Weaseltown, later, sees her sitting in a gazeebo, playing with her gloves and her urn. He complements her and makes a move, enthralled by her mystique… Plus the fact that she’s the one who’s actually going to be the queen. She shoves him away with a blast of ice. Helga comes upon the scene, and the Duke accuses Ingrid of trying to come on to him. Helga thanks him… For showing her what a tiny little monkey-faced douchebag he is. He threatens them with the truth of Ingrid’s powers, and Helga insists that the people will accept her as she does. Le Weasel threatens them more, and Ingrid sens out a burst of cold, but Helga gets in the way, hit in the heart, and freezing over almost instantly. She even crumbles… So… I guess that’s where that broad went.

Of course, she wasn’t even wearing the GLOVES, so what the hell was she expecting?

The first person to see her is Gerda, who backs away from Ingrid, and who is, in turn, pleading that it was an accident and they had all always promised to be there for each other. Ingrid calls her a monster and uses the urn on her… Turning then to Grand Pabbie to erase her pain, and the knowledge of the sisters from the entire kingdom, since Arendelle would be sent reeling from he shock and tragedy. He warns her that magic comes with a price… Whomp whomp. Guess we all know that price, huh?

It don’t make sense hating nobody. Because whoever you end will end up in your family. You hate gays? You’re gonna have a gay son! You hate Puerto Ricans? Your daughter’s going to come home with “Livin’ La Vida Loca.” 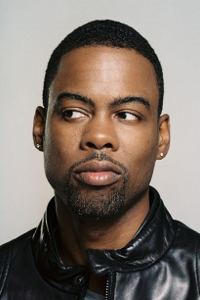 The man is a visionary.

In the present, in Storybrooke, Ingrid moves her mirror into the clocktower (which, really, should just be swept daily for villains at this point).

Or at least lock the doors, you assholes.

Cut to Regina in her crypt, and Robin comes in to creep all over her. She tells him to forget her, proving, once again, that being not-a-villain is a colossal waste of time. Meanwhile, in the sheriff’s station, Elsa and Emma have a plan to nullify Ingrid’s powers, and she and Emma talk about their powers, each of them being the only ones in their respective families with magic in them. Elsa comments that it’s hard when they looks at you differently, but Emma hasn’t had that experience.

She heads off to pick up baby Neal for babysitting duty, and all of the babies in Storybrooke, including Aurora’s munchkin, Cinderella’s little person, and another baby decked out in fucking Mickey Mouse ears (HONESTLY! HOW DO THIS PEOPLE NOT QUESTION THIS?!) are having, like, a Mommy and Me type of class. Things get a little awkward because Snow comments that she wants to give her baby everything, and Ashley calls her a “first-time mother…” 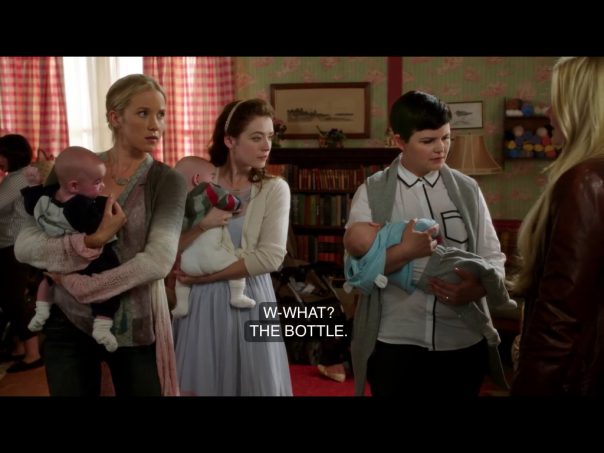 And I guess it must have gotten to her, since the baby bottle that she’s holding starts to spontaneously boil. A call from David diffuses-ish the moment and she, he, and Elsa storm the clocktower to bind Ingrid’s powers with a magic candle, because why not?

They interrogate Ingrid and she insists that Anna put Elsa in the urn. Elsa is bad cop, getting royally (see what I did there?) pissed at Ingrid. Emma dismisses her, and Ingrid manages to get under her skin by referencing things from her childhood which Emma knows to be true but doesn’t remember sharing with this woman. Ingrid assures her that, by the end of the day, she’ll not only see the villainess’s point, but she’ll actually release her from her custody. 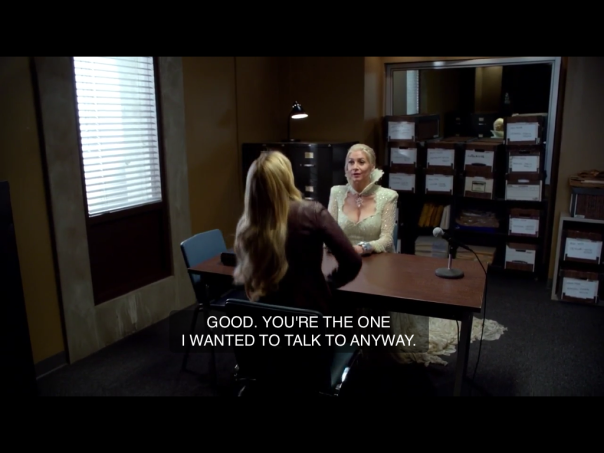 Back at Regina’s, she’s flipping through the storybook, and Henry comes in, needing help with his tie for his first day of work at Gold’s. He asks her what happened, since she was “Tearing through the book with [her] scary face on.” She tells him that she’s moving on, but that she’s not going to let her next opportunity for a Happy Ending pass her by (words to live by, girl). OPERATION: Mongoose is going to be her main focus, and Henry’s using his summer job to snoop about the shop for clues.

But the boy can’t tie a tie…

Back at the station, we get a little bit of info on “The Spell of Shattered Sight” and Ingrid’s obsession with Emma. Ingrid turns it back on her, telling her that her REAL family is her and Elsa, since her biological family is only ever going to look at her with fear or scorn because of her powers. Emma refuses that.

In the clock tower, Elsa, Hook, David, and Belle are inspecting the mirror, the latter of whom tells them that it’s not the same mirror, since it’s not driving her bonkers like last time. David realizes that she actually wanted to get caught, and those magical shackles are doing precisely jack shit to stop her powers.

I mean… Guys… It was a CANDLE.

Robin Hood is getting his drank on at Granny’s, sucking at darts, and confronting douchebag Will Scarlet. The two are on bad terms “because of a woman.” Pretty sure Will Scarlet is their way out of this whole “Marian” problem… They share a story about how Robin and she met and bro out, Will telling him that if you love someone enough to ruin your life over them, it’s always worth it.

Not sure about that logic…

In Gold’s shop, Henry is sweeping the floors, asking after magical stuff, and Gold gives him a potion to restore the old to new…. Furniture polish! He goes back to work, and David and the others come in to ask for his help getting into the iced over police station. Inside, the Snow Queen is needling Emma into resenting her parents, saying that the Charmings have been using her more as a Saviour than treating her as a daughter. She throws baby Neal’s perfect little life in her face, and Emma and her powers Hulk out. She blows the wall out of the police station, and Ingrid escapes. 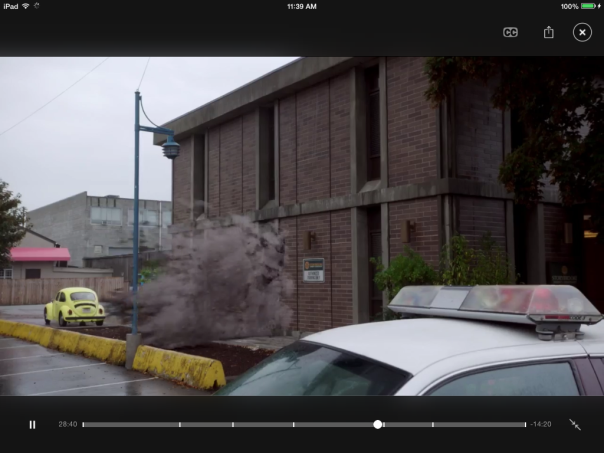 She should blow shit up more often. Just for kicks.

David and the others come to her aid, and she flips out, breaking a bunch of stuff and hurting David in the process. Snow chastises her, and Emma flees.

Back in her crypt, Robin comes to see Regina again, telling er that he’s always lived by an honourable code… But not today.

Back at the Charmings’ loft, they realize that they’ve fucked up by making their daughter think that they’re afraid of her.

And now! She’s living in a bug in the forest!

That can’t be all that comfortable.

Ingrid comes to Gold’s shop, claiming to know Gold’s plan. He wants to separate his power from the dagger so that he can leave Storybrooke, but take his power and Belle with him. She wants her ribbons back. She tells him that he can have the rest of the world; she just wants Storybrooke. She tells him what the last thing he needs is… But by whispering it in her stupid, icy ear, so that we can’t hear it.

He’s totally down for whatever it is.

The episode was alright. Really. I’m just not into this whole Snow Queen jazz. I’m hoping it gets better, and it looks as though it may, but I still can’t get over the fact that there were plenty of other characters going through shit before they brought in the Frozen crew and their whole family history.

We’re supposed to feel some sympathy for the Snow Queen after this episode. She accidentally kills her sister and the other sister turns on her, after all. After telling her that she and the other sister, y’know, the dead one? Well, they’ll always accept her and never see her as a monster…

Whelp, Ingrid trades their Sister Pact ribbons for some shit that she doesn’t even use to protect the people around her. And, frankly, I think that I would understand it at least a little bit if my sibling turned on me after I froze and shattered the other one. Like, “Yeah. Y’know what? Suck me into the Hoover Urn. You’re right.”

That’s totally legit and I don’t blame Gerda. You do you, girl.

Still waiting to find that message in a bottle from the season premiere, though.

Ingrid is just sad and crazy.

BUT! I think that the most important thing to talk about here has almost NOTHING to do with the episode or the goings on in it. Rather… LOOK behind the sisters. In Rumple’s castle. Right there. 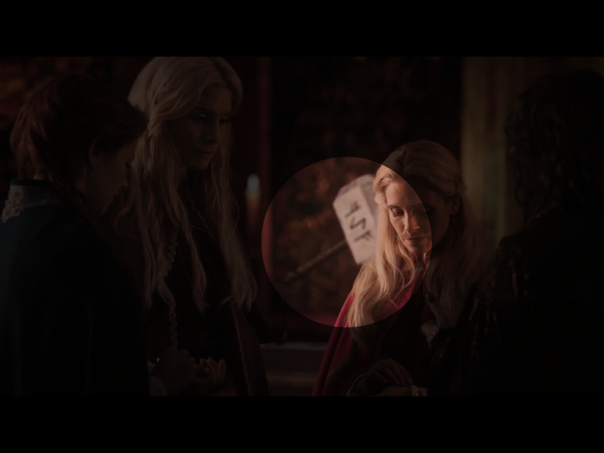 Disney… Stop playing with my emotions.

Because I will lose my actual shit if, next season, the Agents of S.H.I.E.L.D. invade Storybrooke to investigate all the strange goings on.

You’ve already had an episode where Charming offhandedly mentions Asgard.

Don’t toy with me now.

Just give me more of Regina finding the author. And someone explaining the presence of Mickey Mouse memorabilia in this series.