Hoo-boy. These cannibals are spry, man. 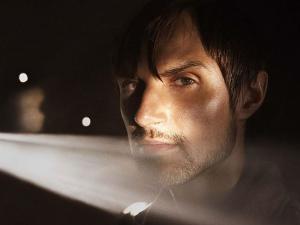 Must be something they’re eating…

Actually, maybe not… Turns out a great many of us were right in our first reactions to Bob’s tears because he has, indeed, been bitten. And he laughs it off because, as Garreth and the remaining Termites rub their dinner in his face, he flings the fact that he’s “tainted meat” in their stupid, leg-meat-stuffed faces. 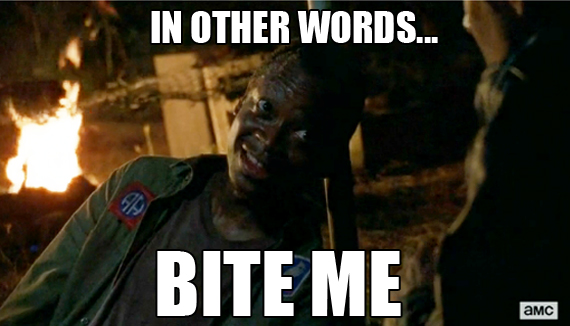 Meanwhile, in the church, Sasha is about to cut a priest, and Rick’s confrontation forces him to confess to locking out his parishioners. Suddenly, noise from outside leads them to find Bob laying out in front. The Termites are outside, waiting for them, but they have yet to make a move…

Aside from painting a big, red “A” outside of the church, marking it as the new shipping container for the Termite’s hunted.

Abraham decides that, since shit has gotten real again, it’s time to bail with Dr. Mullet. Y’know, in the middle of the night, with unknown enemies surrounding them in the dark, who have a clear vantage point of them from any possible exit. It’s nice to see him show a little backbone, even ordering Dr. Mullet around, but it’s a terrible idea. Even as Whatsherface, Glenn, and Maggie agree to go with, it’s only if they stay for one more night. 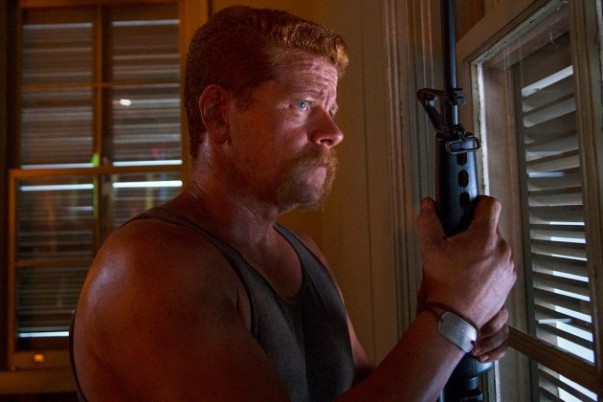 BTW, more important than getting the supposed genius to Washington to save the human race? Finding a men’s grooming kit. Because that whole hair and mustache situation…

Bob and Sasha share a tender moment as she tends to his wounds and he tries to maintain that light-hearted nature of his. Of course, that kind of gives him a darker sort of sense humour, but he’s still got his charm, even in the face of death. Sasha, of course, is trying to maintain her tough-guy exteriour. You can actually see the light leave her eyes as she realizes that their time together is almost over.

As Rick’s group decide to confront the Termites, Sasha demands being a part of their group, even as Tyreese tells her that she shouldn’t throw what precious little time she has with Bob away. She questions how he can tell her that after what happened to that broad that he loved at the prison, and he assures her that he remembers how it felt, and how it blinded him to the possibility of forgiveness. She can’t accept that she could or should ever forgive the Termites, hands him her knife to double-kill Bob once he stops breathing, and joins the wrecking crew on their mission. 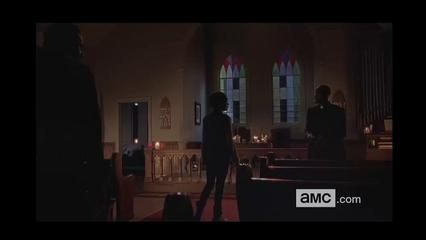 They won’t let her kill the priest and, well, she’s gotta kill SOMEthing.

Unnnnnnfortunately, that leaves the church pretty much empty. And the Termites seem to have been counting on it. They break into the church, leaving only Carl and his gun, Father Gabriel and his hands clasped in prayer, Tyreese and his knife, Rosita, Dr. Mullet, Whatsherface, Judith and her poopy diapers, and a soon to be zombified Bob to defend themselves. Garreth, of course, can’t help but to monologue as they seek them out.

A plaintiff wail from Judith catches the Termites’ attention, and Garreth loudly resolves to just go ahead and steal the baby. Because Li’l Asskicker is sassy.

But a baby’s cry… Well… Daddy comes running. They incapacitate the Termites and, after Garreth pleads, Rick tells them that the only reason they didn’t take them all out from a distance was because bullets are a precious commodity. Rick and the other “heroes” stab the Termites to death, Sasha particularly vicously. Tyreese watches, appalled at the blatant rage in his sister. Because one of the surviving Termites is the guy that I totally thought that Tyreese killed when he threatened baby Judith; his face was just half swollen shut.

Glenn and Maggie, who didn’t partake in the slaughter, look shaken, but Maggie tells him that the church is “just four walls and a roof” when Father Gabriel looks out over the carnage and says that this is the Lord’s house.

It’s the title of the episode, you guys.

On the right side, Michonne got her sword back.

The last few moments of the episode are the group paying their respects to a very weak looking Bob, and Sasha and bob sharing one last moment together. Sasha asks him what the good could be that comes out of this bad, since that’s his whole thing and, in typical TWD fashion, he bites it in that moment, never giving her that answer. It’s a metaphor and they’re trying to say that there is no good to be had. As she tearfully draws her blade, Tyreese comes in and asks her for it, volunteering to put Bob down for her. He tells her to step outside, and ruins a pillow to double-tap Bob.

The next morning, after they’ve buried Bob, Abraham heads off with Rosita, Whatsherface, Dr. Mullet, Glenn, and Maggie in the bus. They’re headed to DC, and the group promises to head to DC soon as well. They can’t head off just yet, though, since they’ve got to wait for Carol and Daryl. Ford leaves Rick a map and an apology. 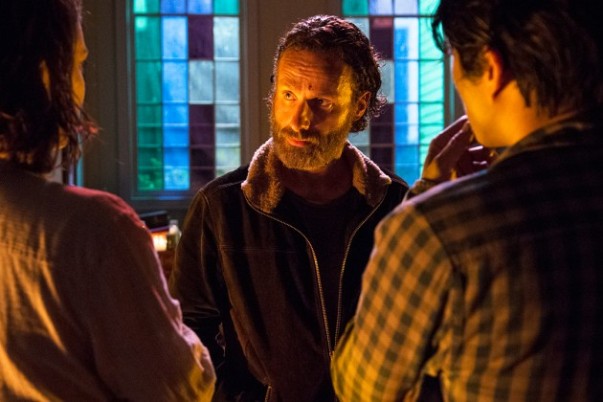 But… Without you guys here… Patty doesn’t care about the show!

Rick heads off to help Tyreese, who is digging graves for the Termites, asking how it was for him getting to Terminus. Tyreese don’t really answer.

As night falls, Michonne broods on the steps on the church, cradling her katana, Father Gabriel comes to join her, claiming to be unable to sleep, hearing the sounds of death in his church again. She says that that will never stop, though at least it won’t be continuous, but a sound from the front of the church draws her attention… And it’s just the return of Darryl. When Michonne asks where Carol is, Daryl turns to someone off camera and says, “Come on out– .”

AND IT CUTS TO BLACK.

And next week is going to be a Beth-heavy episode. Which, fine, we haven’t seen her in a while, but it’s still kind of asking a lot. Because, I swear, if she sings…

So… You may have noticed, if you’re a regular reader, that I was not nearly as snarky in this recap as I often tend to be. That’s because… This episode was kind of good. And the characters were all on point. And the carnage was at a level fans have come to expect, but without the hokiness that we sometimes see. I’m trying to find stuff to make fun of, but I have a lot of feelings right now.

One thing that I find kind of irritating is that the “Curse of the Black Guys” continues on in this episode. That is, introduce a new black guy into Rick’s crew and, within a couple of episodes, one of the black men in the group already is going to bite it. It happened with T-Dog when the black prisoner came on the scene. It happened with the prisoner whose name I never learned when Tyreese was introduced. And now it happened with Bob, after the introduction of Father Gabriel.

It kind of stands out, guys. I mean, yeah, characters are introduced and killed off all of the time, but this is a pattern with the black male characters.

But, next week, like I said, is Beth-heavy. Judging form the teaser, where Daryl’s voice-over tells us that Beth had been taken, but she is alive, I think that maybe the reason we don’t see Carol step out when Daryl says, “Come on out,” in this episode is because she’s dragging a disoriented and very much shaken Beth along with her.

My guess is that Beth has been through some traumatizing shit, and all of the song has been taken right on out of her.

But we’ll find out next week.

See you then, nerds!