Here we are at the second episode of Arrow, which will continue the story of last weeks shocking ending.

The episode starts off with Oliver and the team heading down into the basement where they find the dead body of Sara. Laurel did not know what else to go so she bought Sara there. Oliver and the team are completely distraught over Sara. Diggle make sure that Oliver knows he will be there the whole way trying to find Sarah’s killer. Oliver calls Thea because he needs his sister at this moment.

Oliver goes to scene of Sarah’s death, hoping that he’ll figure out who did it. Well going through the scene he finds arrowheads, which means that someone as skilled as him had to of done it. The only people who are skilled as him are in the League of Shadows.  While going over the scene, Felicity calls Oliver letting him know that Captain Lance wants to see him.

While meeting with Captain Lance, Oliver finds out there is another archer killing people throughout the city.  The first thing Oliver and everyone else thinks is that this is the person who killed Sara.

Diggle, checks around in A.R.G.U.S’s database for information about the mysterious archer, where he find out about Simon Lacroix.  The team manages to track down Lacroix who Oliver goes after in a motorcycle chase that does not go Oliver’s way.

Laurel is very unhappy about how the motorcycle chase went and she is ready to take on and shoot Lacroix herself.  Oliver tells her will find out who did this to Sara.  Felicity goes over to Queen Consolidating because Ray will not leave her alone, he even brought the little Best Buy type company that she was working for.  Felicity quits that job because she wants nothing to do with Ray. 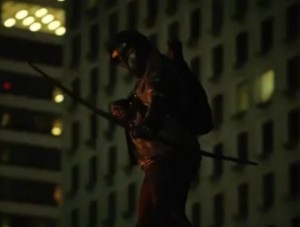 Laurel goes to visit one of the people who Lacroix shot, after making the cops let her in, which includes letting them know that she is the captain’s daughter.  Laurel actually gets all Batman crazy on the guy and slams his injured arm onto the metal railing until he tells her what he knows.  As the guy in confessing everything to Laurel, he is shot in the heart with an arrow that came right through the window.  Ok, Lacroix is actually really good.

The hardest part of this would be how Sara’s death affected everyone, Felicity always thought Sara was so strong like an Amazon that it is hard for her to see her dead.  Oliver is being hard on Felicity because he wants to find Sara’s killer, but Felicity breaks down saying that she can’t right now because her friend is dead.  Felicity yells at Oliver for not having any feelings but Oliver tells her that he cannot break down because everyone is looking to him to lead.  If he breaks then everything will fall apart.  For Oliver it is his fear that he will be just like Sara.

They realize that Lacroix will be targeting the party that Queen Consolidating, where Ray talks about his plans to turn the city into Star City, that name sounds familiar.  Oliver and Roy get to the party where they have some great fights with Lacroix and Oliver does a jump out the window, shoot the arrow, and swing into another window.  Poor Roy, just watches all of this realizing that he did not get those lessons. Laurel shows up because she fully plans on killing Lacroix for killing her sister but the thing is he didn’t do it.  They leave him for the police after Laurel tries to shoot Lacroix but can’t because there are not bullets, good job Oliver.

It is confirmed that Lacroix could not have done it but Oliver vows to Laurel that he will find out who did this no matter what.  Laurel realizes that she should tell her father but she can’t break his heart or endanger his health anymore.

The team has their own burial for Sara in her original grave and Laurel hates it because no one will ever know what she did and how she helped the city.  This is really hard for Laurel but she only just got back her sister and had a good relationship with her.  Diggle tells them that they named the baby Sara.  This makes Oliver realize that he does not want to wind up like Sara and that he wants to live.

Over far away from this all Thea is being trained by her father into being a skilled fighter.  I am very curious how that is going to when she comes back to Starling City, I don’t see Oliver being happy about it.  Actually Oliver is going after Thea in the next episode so we should see then. 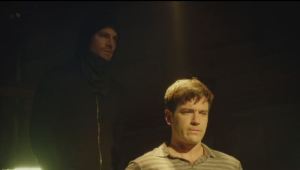 Of course we can’t have Arrow without flashbacks, so while still in Hong Kong apparently Waller is trying to turn Oliver into an assassin for her.  Oliver is supposed to kill Tommy his best friend, but Oliver can’t do it.  The only reason Tommy is on the hit list is because of a hacked email.  Oliver is able to get around killing Tommy buy kidnapping him and saying that he staged the email because he was hoping a family member would come so he could ransom them.

It was an interesting episode because it touch on a hard subject and made everyone face their deepest fears.  It is an important issue to tackle in the superhero world what do you do when someone you care about dies?  What do you do when a teammate is killed? It was great to see Felicity move on because she cannot be pinning over Oliver forever.  It was great for Oliver to realize that he does not want to die like that. It was a deep episode that I am happy they did, it also showed the darkness in Laurel even more.  It definitely looks like she will be taking on the Black Canary mantel at some point.

Until next week when we see how Oliver handles the changes in his sister’s life.