← Wonder Woman to Have New 52 Origin in “Batman v. Superman: Dawn of Justice”
What We Would like to See Happen on ‘Flash’ →

RDJ to Appear in Cap 3 In Huge “FUCK YOU” to WB’s Batman v. Superman

Ah. Ah, this makes me feel better. After the boiling rage brought on by the confirmation that Wonder Woman’s first movie appearance is going to feature her shitty New 52 origin, a bit of good news from the Marvel Cinematic Universe. 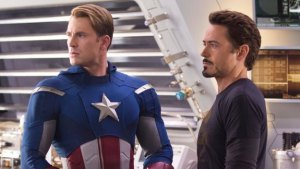 Also, maybe even a little bit of unusual schadenfreude on my part.

See, “Dawn of Justice” and “Captain America 3” were both open on May 6th, 2016, and I’m pretty sure that Cap would have blown the Superfriends out of the water… Because Robert Downey Jr. is going to play a major role in the apparent opening of Marvel’s hugely successful “Civil War” storyline.

No wonder DC and Warner Bros. ran all the way back to a March release date with their capes between their legs.

On to the story, though…

After several months of negotiations with RDJ, the man has come onto the film in a much larger capacity than originally desired by the studio. In fact, by all accounts, RDJ pushed for the larger role himself.

The Civil War storyline saw Cap and Iron Man at opposite sides over the proposed Superhero Registration Act. Iron Man is for it, since, hey, everybody already knows he’s iron man and it hasn’t affected him poorly. Cap, however, feels like it’s an affront to freedom and is actually against the law, not such a hard thing to imagine since he probably finds himself fairly disillusioned with the government after the events of Winter Soldier. In the centre of the fight between the heroes and their growing factions of masked supporters, in the comics at least, is Spider-Man.

AND, rumour has it that Marvel Studios is actually trying to talk Sony into letting them use the character for this film, so we all might just end up fangirling so hard at this movie…

Also, Marvel Comics is reviving the Civil War story, certainly in a new capacity, in 2015, likely in anticipation of the next wave of Marvel movie releases.

All in all, good news as usual from MCU, giving us all a reason to live after the debacle that seems to be everything about DC’s attempts at film-making.

It really does seem to be true that Marvel can do no wrong.

← Wonder Woman to Have New 52 Origin in “Batman v. Superman: Dawn of Justice”
What We Would like to See Happen on ‘Flash’ →