Here we are at the highly anticipated season premiere of CW’s new show The Flash, which is a spin-off from CW’s Arrow.  The only things that we already know going into the show is that Barry has visited Starling City and helped team Arrow on a mission. Barry happens to know Oliver’s secret, Barry thinks Felicity is pretty, and that an accident left Barry in the hospital/coma.

The episode starts with Barry remembering the night that his mother got killed.  From what he remembers is that there were streaks around his mom and then he was in another location far away.  His father got arrested and convicted for the murder.  Then we jump forward a few years and Barry is arriving late to a crime scene.  His adoptive father Detective Joe West covers for him saying that he sent him out to get something.  Barry is a forensic guy on the Central City Police Force, later on in the day Barry is hanging out with Iris West who is Detective West’s daughter.

Barry has a crush on her but she only sees him as a brother/friend. She asks him about his time in Starling City and if he found the vigilante there.  Barry later that night goes into the lab to work on his stuff and look at his mom’s murder.

Now lets jump 9 months ahead and Barry is still in a coma in Star Labs.  Caitlin and Cisco are around Barry checking on his vitals.  Barry wakes up out of the coma shocking everyone who is running around him telling him what happened, which is that he was struck by lighting.  Barry is more shocked to find out that lighting gave him abs, which is odd because his muscles should have atrophied.  Harrison Wells comes into the room because he has been helping take care of Barry, Wells was doing research that was going to be his great invention a particle generator, but it exploded the night of the lighting storm.  When Wells heard about what happened to Barry he asked to have him brought into Star Labs to stabilize him because he kept flat lining, Barry’s heart was not stopping it was going too fast.  Barry is all interested to hear what they have to say until he find out that Iris had been by to see him while he was in the coma.  Barry then leaves the lab even though no one wants him to because they need to run tests on him.

Barry I guess stops home and changes because he is wearing completely different clothes but Iris is happy to see him because she had been so worried.  She is amazed that he is out the lab so fast but Barry tells her that he is fine.  While in the cafe Iris works in Barry notices in slow motion one of the girls drop a cup, very much like Spider Man does.  Barry also pays a visit to the police station where he is greeted by everyone and also find out that one of their own died during the lighting storm.  Barry notices somethings are wrong with his like his hands are shaking.  Barry starts to run only to crash into a cop car and the back of truck.  Barry then heads back to Star Labs where they run test to figure out more about what is going on with him but to also see how fast he can run.

Again Barry runs into some canisters, because he cannot stop still, but also because remembered the night of mom’s death.  He remembers seeing someone there running around his mom in the blur.  Also Barry seems to have healing powers because a hand fracture was healed when it shouldn’t have been.

While all of this is going on someone is robbing the location bank with some weather creating powers, why do I feel like a Smallville thing is happening here.  Cyde Marden is the bank robber, he is thought to be dead in a plane crash the night of the lighting storm.

Barry went to see Iris who he found kissing Eddie one of the new cops who is partnered with Detective West.  It seems that Iris and Eddie are dating because he was really helpful when Barry was in the hospital. Iris’s dad does not know about them and Barry is not happy about it because of his crush on her.  While they are talking a car comes driving toward them and almost hits them but Barry is able to get them out-of-the-way.  Barry takes off after the car and crashes through the window only to see Cyde Marden.  Barry talks with Detective West telling him what happened but Detective West gets mad at him, telling Barry that he needs to stop seeing things that are not there.  Eddie come up later on and tells Detective West that a sketch from the robbery shows a guy who looks just like Cyde Marden.

Barry takes off to Starling City where he talks with Green Arrow telling him what is going on.

Back at the lab Cicso pulls out a suit that had been they had been creating for a different purpose but never got used but it should work out really great for Barry because it should hold up when he runs.

Barry takes the suit out because he plans on stopping Cyde Marden who is the weather man. It seems that the explosion did create him as well as well as a few other metahumans as the team is calling them.  Barry runs down to the barn where Cyde is hiding out in his new suit, Detective West also happens to be there because. Barry saves Detective West from getting killed by some steel and again I think Barry did it by not stopping.  Barry goes to take on Cyde who is creating a top speed tornado like the biggest and more dangerous on possible (also side note why couldn’t they let Storm do something like this in any of the X-Men movies).  Barry decides that he is going to run the opposite way in order to counter the tornado and he tries but he was not able to. 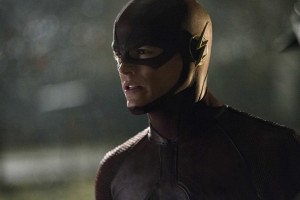 Then Wells comes on the com link and tells give Barry a great pep talk and tells Barry to run.  Barry runs and is able to stop Cyde’s tornado and is about to take on an angry Cyde when Detective West shoot Cyde.  Barry took off his mask, which let Detective West see who it was that saved them.  Well one, great way to not have a secret identity and two it looks like Detective West is going to be doing some more covering for Barry in the future.  Detective West now realizes that Barry has not been lying and that he really saw what he did the night his mom died, also Detective West makes Barry agree not to tell Iris about any of this.

Barry pays a visit to his dad in jail letting him know that he knows he didn’t kill his mom and how proud he is to be his son.

Over in Star Labs, Wells goes into a secret room where he gets up out of his wheelchair and walks.  Then he walks his over to this podium that shows him a newspaper from the future that says how The Flash disappears in a crisis.  Wait, the scientist guy can walk and he might be from the future?

It was a good first episode it gave a lot of background for people who might not be as familiar with Flash like myself.  I like how they are showing him getting use to his new powers.  I always hate it when it’s like here are powers oh look I already know how to use them.  That was one of the nice things about Man of Steel and Smallville was how they showed Clark got use to these new powers.  I do enjoy the lighter tone with this series as compared to is counterpart Arrow, that fits The Flash more since The Flash is younger and more of a joker.

Now lets talk about the end scene and the mom’s death, the end scene more than likely is making reference to events from infinite crisis.  As for the mom’s death it looks like Professor Zoom is in there and since we all know he coming onto the show (check out Patty’s article on it).  It seems they might be pulling from the story line when The Flash creates a time paradox because he goes back in time to save his mom.  If we have learned anything from Doctor Who, you just don’t do that.  Based on all that, the show looks like it is going to be good and might be pulling from well-known story lines so I guess we will wait and see.