← The Flash: Season Premiere City of Heroes Recap
TFP votes for the new cast of ‘Age of Apocalypse’ →

Here we are the season premiere of Arrow, it has been an interesting first two seasons.  Let’s recap what happened in the season finale, well after an epic battle for Starling City that left many dead, team Arrow with the help of the League of Shadows was able to take down Slate Wilson.  Wilson is behind bars in the cell underground located back on the island.  Sara has gone back to the League of Shadows because that was the agreement they made when she asked for their help.  Detective Lance is a detective again but he was dying from internal bleeding on the pier.  Thea was pissed off at everyone especially Roy so she left town with her father Malcolm Merlyn.

Don’t be mad my costume is cooler

The episode start with some action going on where Green Arrow and Roy are trying to save the city.  It seems that Roy is officially a member of the team.  Also Roy has a better costume then Green Arrow, I am just saying.  The team arrives back and Oliver gives a necklace he made out of arrow heads to Diggle for his new baby girl.  Oliver is still apparently broke and does not have his company but Felicity plans on doing what she can to help get it back.  Diggle mentions how Oliver is only lying to himself saying that he is not in love with Felicity because he really is.

Felicity is walking with Oliver the next day as they prepare for his meeting with Queen Consolidated to get his company back.  While doing this, Oliver takes Diggle’s advice and asks Felicity out on a date.  I think all the Olicity fan are going crazy at this moment.  I will admit I am curious how this couple will do.

Oliver also runs into Laurel because she prosecute anyone that he brings in, they are actually making a great team.  Laurel wants to show him something so she has him go over by her dad, can well we all can breathe a sigh of relief Detective Lance is alive and well.  Not only is he alive and well he is Captain Lance now, having been promoted because of all his work during the giant war on Starling City. Captain Lance make sure to thank the Arrow for all that he did to save the city and say that he is recognized by the police dept and he has their full support. 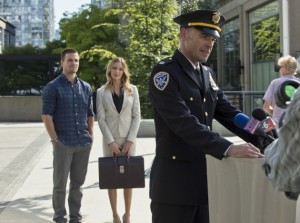 Also there is a new Count Verdigo who out drugging people, we now know who the villain for the episode will be.

Felicity is not working for Queen Consolidated and is basically works for a geek squad.  Even while she is at work she has help Oliver out during his missions.

At this point Oliver has nothing else to do with his time besides protect the city.  We all know that Oliver is not going to get a job but also what would he get a job doing.  Enough of that, while Felicity is working a man comes up to her (Brandon Routh) asking about basically hacking equipment.  Superman is now a hacker,  I guess he needed a career change.  Felicity helps him out and he tells her that he has a friend who is looking to hire someone of her skills because he knows all about her and how she use to work for Queen Consolidating.

Oliver goes on a date with Felicity which is actually going rather well since well they have exhausted all first date topics.  Count Vertigo put a tracker on the Green Arrow so he has some of his people blow up the restaurant.  Oliver of course is fine but Felicity get knocked unconscious.  This always happens everyone else is fine but Felicity, she has the worst luck or the writers don’t like her.  Also where did Oliver get the money to pay for this date, he doesn’t really have the money he use to.

To keep with things not going well for Oliver he does his pitch to the board which was actually really good.  But Superman happens to be the other person pitching to board, Ray Palmer has a much better pitch because he is well a more charming person. Oliver is curious how Ray was able to get all that inside information, it has nothing to do with the hacking advice that Felicity might have given him.

At one point Oliver goes against Count Vertigo again only this time Captain Lance is around and he gets injured and put into the hospital.  Seriously the man was standing with a cane earlier in the episode can’t we cut him a break.

There is epic end battle with Count Vertigo where the team of Oliver and Roy take them on because Oliver would not let Diggle fight because Lyla is pregnant and Diggle has to focus on being a dad right now.  Oliver takes on Count Vertigo while Roy takes out his minions and with Felicity’s help defused the bomb.  Outside of the building giving them even more help would be none other than Black Canary, well looks who happens to be back in town leading a hand. 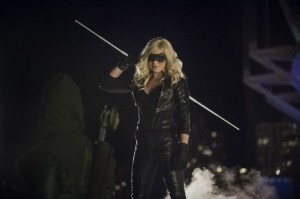 Felicity has pretty much told Oliver that there is not chance for them now, which is sad because they kissed.

Sara visits with her sister for a bit but she does not want to tell their father or anyone that she is back right now.  After a brief sister reunion:

WTF did they just kill the Black Canary?

We all know Arrow would not be Arrow without flashbacks to Oliver’s time away.  Last season we left with Oliver being taken to Hong Kong to work for Amanda Waller.  All that has been discovered in this Oliver keeps trying to escape much to the annoyance to Waller.  One of the men who beat up Oliver only did so because Waller is threatening in through his son.

I have to say it was a good episode back because it shows where everyone is and what they are doing after the fall out from the epic battle last season.  I find it interesting that Felicity is working on a geek squad, she is way to smart for that and way too over qualified.  I am intrigued to see how things go with Diggle being a dad because he will eventually want to get back into the action.  I am sure Waller is going to be looking to get Lyla back into the field, I am sure Waller is going to be a thing this season because why would they be focusing on his time with her otherwise.  Now with Sara dead, is Laurel the actual Black Canary according to most lore going to take up the mantel.  Also who was the mysterious guy who killed Sara, my money is on Ra’s Al Ghul because he is supposed to show up this season and she knew him.

Until next episode when the team and Lance’s deal with the death of Sara again.

← The Flash: Season Premiere City of Heroes Recap
TFP votes for the new cast of ‘Age of Apocalypse’ →