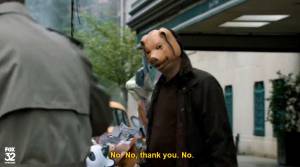 As Danzer tries to sneak out, a man wearing a pig mask and pushing a cart confronts him, handcuffs him to a set of balloons, and we and the media of Gotham watch as Danzer is lifted into the sky and the people of Gotham lose track of him before he can stand trial. 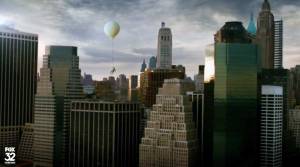 Just like UP! But less likely to make you ugly cry.

Back at GCPD HQ, as Gordon questions whether they’re going to call Danzer’s disappearance a murder without a body, Bullock dismisses him and we meet yet another officer of the law who seems less than on the up and up. Lt Bill Cranston shakes Gordons hand before leaving the room, taking his award for service to Gotham with him.

I mean, yeah, that does look like it would hurt.

As we hear a perp getting “interrogated” by “Sgt. O’Brien,” an officer brings in Selina “Cat” Kyle. He says that she’s scheduled to be transferred to the mysterious child farm only referred to as “Upstate” tomorrow. 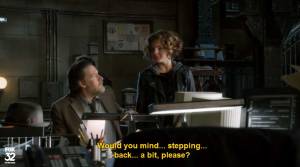 Yeah, bullshit. She’s in all of the promos. She’s not going anywhere.

Gordon and Selina return to the scene of the Waynes’ murder and she fills him in on what went down, how it happened, and what she remembers about the man who held the gun.

So, like, the sun doesn’t ever even shine in Gotham?

Including… That she saw his face for a moment before he pulled up his mask and approached the Wayne family. Gordon is hesitant to believe her, but she confesses to having stolen a man’s wallet nearby, just before the grander crime was committed, and having dumped the wallet down a sewer grate. In order to confirm the validity of Selina’s claims, he’s got to retrieve the wallet from the sewer and match it to a man who had reported his wallet stolen, matching Selina’s description of the event. He cuffs her to a rail as he goes down to search. He finds the wallet, but… Well.

Who really thought this WASN’T going to happen?

Cut to Fish Mooney (whose name I still can’t even believe). As she feels up her loverboy’s chest a bit, in walk Detectives Montoya and Allen of Major Crimes, asking after the whereabouts of Oswald Cobblepot. Fish all too eagerly places the blame.

Because, y’know, she’s just so innocent.

She leads them to believe that Falcone gave the order.

Meanwhile, Penguin is stabbing a man who recognized him to death in an alley before using the dead man’s money to buy a tuna sandwich (the most nefarious of sandwiches, as everyone knows). 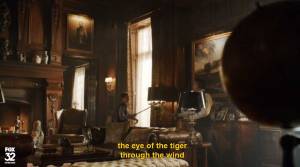 Alfred and Bruce are swordfighting with canes, but a misstep on Bruce’s part reveals something unsettling.

It turns out that Bruce has managed to get himself a copy of the police file on his parents’ murder, complete with grizzly crime scene photos.

…Between this and the burning himself and the standing on the very edge of the roof, this show is really showing us the side of Bruce that we rarely see in any other medium.

Jim Gordon fins himself scraping poo off of his shoes and being surrounded by Montoya and Allen, grilling him about his alleged killing of Cobblepot. He tells them they’re mistaken before brushing them off to meet Bullock on a lead on their Balloon Man. 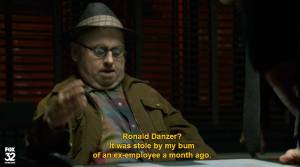 The man volunteered the information, BTW. Bullock ain’t do shit.

We find out the guy’s name (“Smikers”). We also find out that he stole four of those weather balloons.

And here comes Contestant #2. Lt. Cranston is shaking down drug dealers for their takes, and is not so easily taken by the Balloon Man. 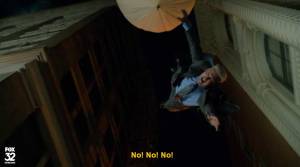 So, part of me is stuck wondering why he didn’t use the gun that he almost certainly had on himself to shoot the balloon while he was still relatively close to the ground.

The other part of me is looking forward to the fire that should be lit under GCPD’s ass now that they’ve got a cop killer on the loose.

She wears no pants this entire episode.

Barbara and James discuss the case a bit, and she pointedly mentions that a cop was the latest target.

Jim says that when people lose faith, “That’s when you get vigilantes.”

At GCPD that day, Bullock and Gordon are dressed down by their CO, and Bullock insists that they’ll have their guilty party in Carl Smikers, regardless of, y’know, whether he actually did it. Regardless of Gordon’s dissent, they hit the streets. 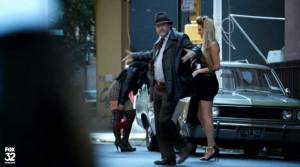 Catching up with Cobblepot, who we saw going shopping earlier (read: “Killing a man for his shoes so that he could then take the man’s job, fully prepared.”), we see him working in an Italian restaurant being run by the standard stereotype.

Turns out, mob bosses like to frequent the joint, so thus begins the Penguin’s waddling his way back up to the top.

Gordon and Bullock have tracked down Smikers and, as they attempt to make their arrest… Things don’t go quite so smoothly. Gordon gets his man, but Bullock is getting his ass handed to him by She-Hulk over here.

Aw, c’mon, let Bullock get hit with a TV.

Back with Fish, she is reassuring loverboy Lazlo that everything will be fine… Before she tells her swole henchman to take out the competition’s girlfriend, and Lazlo to boot.

In the Gordon household, we once again see a pantsless Barbara, this time being confronted by Detective Montoya, who has just decided to let herself into the apartment. Because illegal searches are totally fine, apparently.

And then we get a series of bombshells dropped in a row:

Maybe not quite that far since, as Montoya moves in for the kiss, Barbara turns away and coldly tells her to leave, after having already taken back the key.

So, this whole Major Crimes investigation of Detective James Gordon might be partially fueled by jealousy.

Meanwhile, Gordon and Bullock have their man, but he was just a go-between. He says that he sold the balloons to a third party to pay off some loan sharks. Bullock exclaims that it’s the perfect crime, since both the murder weapons and the bodies are in the stratosphere. Smikers assures him that the bodies will eventually come back. 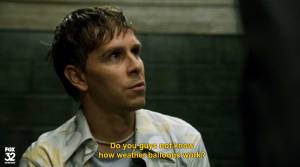 I mean ’cause, psh, yeah. Who DOESN’T know how they work.

After hearing some simple science, Bullock gives Gordon a piece of bagged evidence, and Gordon says that he knows who the Balloon Man is.

As the Penguin makes nice with a mob boss (masquerading as a half-Italian named “Paolo” who loves his mother dearly), we learn that some “Arkham” deal is going down, and, more currently, the third victim of the Balloon Man has been claimed. This time, it’s a Cardinal who has been accused of multiple counts of sexual abuse which, yeah, fuck that guy, then.

At GCPD, Gordon gives the rundown on his suspect.

No, I’m going in half-cocked. Just like Detective Bullock. HEY-YO!

Gordon had signed the papers in the evidence bag himself… When he received Selina Kyle from that otherwise unnamed cop earlier in the episode. During their scuffle, Cranston had taken the pages from the killer (dude name Lamond in Juvenile Services), and they were found in his pockets (along with Lamond’s apartment keys) once his body came down.

Some more sleuthing later, and Gordon figures out where Lamond has been hiding out. 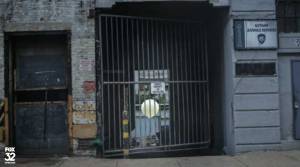 I mean, I dunno HOW they could’ve found the place. It’s so SUBTLE.

After a confrontation with Lamond, wherein he’s got a gun to the back of Bullock’s head for the most part, the tables are turned when he makes a stupid mistake and Bullock is able to clip the last balloon to the killer, raising him up by sheer irony… Until Gordon decides to grab onto the swiftly ascending Lamond and, despite that terrible decision, proves to be the smartest person on this show so far.

The men fall on top of the van, luckily a relatively short distance.

The showdown with Lamond was another challenge directly to Gordon. Lamond was an idealist, too, but the system has beaten him down into this caricature of justice, taking the law into his own hands.

I mean, that is what Gotham does to people.

But Gordon is clearly not giving up. That’s why he jumps onto Lamond. Possibly to initially still save the man from certain doom, so that he can face the justice system. But, as that failed, Gordon’s actions force Bullock to do the right thing; in order to save Gordon, he’s got to save Lamond, no matter how much the cop killer might deserve to die in the older detective’s eyes.

After a commercial break, we’re back at Fish’s place, for another confrontation between her and Carmine Falcone. Falcone’s girlfriend met an untimely end, as we learned she would earlier in the episode, and the two discuss the possibility of rival crime boss Maroni being involved. Once again, we hear that key word. “Arkham.”

Probably the secondary arc of the first season, the first being the discovery of the Waynes’ killer.

As paramedics load the injured Lamond into an ambulance, Gordon assures him that he will do his job, then demands to know who the final victim was intended to be.

We don’t hear it as we are instead sent over to Wayne Manor, where young Bruce is watching the news report of the events.

This also being the first meal he’s eaten in days, if earlier dialogue is anything to go on.

The episode closes back at Barbara’s place, where she assures him that he can tell her anything. He confides in her that the Balloon Man’s last victim, according to Lamond himself, “didn’t matter.” Meaning that anyone in a position of power was fair game. All of them are corrupt and that’s why the city embraced the vigilante. Gordon asks if she thinks he could be like that, and she refuses, professing her love.

Tears and all of that…

A knock at the door calls their attention, and it basically confirms Jim’s innocence, as their guest is none other than the man Gordon was supposed to have murdered.

And that’s it for this week.

This show has gotten better with each episode since it’s overly dramatic pilot. Granted, there are still discrepancies, and still ridiculous things that I’ve got to force myself past, but I do find myself interested in where most of the characters are going, even though I already have the gist of it from over a decade of being a comic book fan. Like, I know the Penguin is going to end up being the Penguin. Of course. But this younger version of him, claiming to be some kind of savior, raving about Gotham’s future and rivers of blood in the streets..?

Seeing little lunatic Bruce Wayne and (as of this episode, thankfully far less harsh) Alfred Pennyworth, enigmatic (Why does a butler know how to fence?) servant thrust into the role of father figure.