Here is an all new episode of Sleepy Hollow, lets recap what happened in last weeks season premiere; Ichabod got out of the coffin, Abbie was released from purgatory, Jenny is alive, and Ichabod drove a car.

The episode starts with Katrina being held hostage in a clearing because of course she has not gotten out, by Henry and the Horseman.  They are preparing to cast a spell because well Henry is better at magic then his mother obviously.  Then we are by Ichabod and Abbie because well is was just a bad dream that Ichabod is having because well all he does is think about Katrina.  Abbie tells Ichabod that he needs to stop with that because they will save her.  Abbie leaves him because she has to go and meet the new captain in town – Sheriff Reyes.

Sheriff Reyes happen to know Abbie when she was a little girl because she responded to a bunch of the calls to her home as a kid.  Sheriff Reyes wants to bring the sanity back to the town…lol…lmao…how did Abbie keep a straight face because I would have burst out laughing.  I see this new sheriff being a problem but that is how it always is. 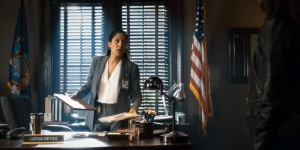 Over in Katrina hostage land, well she is no longer tied up but she has the necklace still around her neck.  She can still see the Horseman in his true form, I think he has another new outfit.

The Horseman is dead set on having Katrina so he tells her that Ichabod is not the man she things he is because he has moved on. He managed to get Abbie out of purgatory really quickly while Katrina had to stay there for a while, now let’s flash to an Abbie and Ichabod hug. The whole reason that Ichabod had to get Abbie out so quickly is because the story called for it.  Now that Katrina is being manipulated let’s see how things go, especially since Ichabod and Abbie are outside the cottage.  Abbie had asked Ichabod if he could think of a place where the Horseman could be holding Katrina.  Well Ichabod was able to figure that out but Abbie stopped him from rushing in because well plans are a good idea.

Now Henry in Moloch’s lair apologizing to his father for failing to retrieve the key.  Moloch like the abusive parent that he is told Henry that  is fine but not to do it again.  They must continue on with their plan.

The trio is coming up with a plan to save Katrina because that is what is important and Ichabod’s reasoning it besides she is his wife and he has not gotten in over 200 years.  The reason is that he gives is that Katrina is a witch of extraordinary powers, really she is still being held hostage so I am not sure how strong a witch she is.  Abbie buys this because well what else is she going to do.  While doing some research they come across a monster that was created by Benjamin Franklin and Katrina’s coven to battle the Headless Horseman. When Franklin was done trying to hit on the witches in the coven he started assembling the pieces of the fallen soldiers, so the Kindred is the basically Frankensteins monster.  Franklin had gotten everything for the monster besides the head.  Oh wait they have a head lying around but where is it, oh that’s right Irving knows.  After Ichabod manages to convince Abbie that they need the Kindred because she is not feeling the whole bringing another monster into the game, Abbie agrees to see Irving.

Abbie pays a visit to Irving in the jail in order to check in on him but also to find out where he put the head.

Abbie and Ichabod head to the bank in order to get the head, while there a man comes up to Ichabod offering him a credit card.

(I just had to post that video), Abbie takes Ichabod away so they can grab the head.

While all of this is going on Jenny is in the archives of the police station because that is what they do.  Well the new sheriff walks in and wants to know what Jenny is doing in the archives.  Of course Sheriff Reyes knows about Jenny’s rap sheet and the fact that she escaped the mental hospital.  Sheriff Reyes then looks through Jenny’s bag because she wants to know what in there and finds a ton of weapons.  The Sheriff then arrests Jenny because well she should not be in possession of all the weapons.  When Abbie and Ichabod get to the police station they find Jenny in a jail cell.  Abbie does her best to take blame but Jenny won’t let her.   While we are at it the Sheriff decides that the force does not need a history consultant.  This is the first time that I have found a female that is not under Ichabod’s charm.

By this point we all want Irving back, well he is under going a lie detector test where he tells the truth about who those police officers who were killed.

When you talk about a demon killing people well that does get you put in a psych hospital, which is exactly where Irving wanted to go.  Unfortunately when Irving is in the hospital he is tied down to the bed.  Well I am sure they will be able to get around this small issue.

Abbie and Ichabod head down into the tunnels with Benjamin Franklin’s book because they are looking for the location of the Kindred.  Well Ichabod is lost in the tunnel and like a true guy he refuses to ask for directions.  While down there Abbie basically tells Ichabod how seeing him was he greatest thing.  She had even forgotten the rule not to take anything or drink anything because she was so happy to see him. Abbie is basically confessing her love for Ichabod and he turns around and wonders if Katrina is his weakness.  Ok, at the end of last season I had not chosen a team but I am leaning towards Team Abbie.  I am really over Katrina because I could forgive somethings but she is being a useless witch.

Henry and the Horseman are talking about Moloch’s plan, which Katrina over hears part of it.

Henry shows up to greet his mother who calls him by his birth name, which I had forgotten.  Henry does not like hearing his birth name, I wonder if that might be a way to reach him. Henry tells Katrina that Ichabod will be dying tonight because he is on his way to save her.

Well Ichabod is out by the Kindred’s grave saying the incantation that does not work the first time but works the second time at the right moment because the Horseman had just shown up.

While the Kindred and the Horseman are battling Ichabod leaves to go save Katrina.

Henry is sitting in a room mentally controlling his creature because we can’t have Henry actually go into battle as the Horseman of War.

Ichabod arrives where Katrina is and tries to take her away but she refuses.  Seriously do you know all the work that Ichabod did in order to get you.  Katrina tries to tell Ichabod what she had learned which is that something big is going to happen.  The only way that she can find out more is by staying.  Well that makes sense but how is she suppose to give this info to Ichabod, she can’t seem to use her witch powers. Katrina also knows that if she leaves the Horseman will tear down the countryside looking for her and kill everyone including Ichabod. Katrina also wants to see if she can reach Henry, while that is a good mom idea I dunno if anything can reach him. After a very nice long kiss because we have time for that, Abbie comes in telling them they have to go.  Ichabod leave Katrina causing Abbie to give a WTF look, I would have done the same thing.  The Horseman is happy that Katrina stayed with him. Abbie lost the Kindred so they have no idea where their monster is.

Irving needs a lawyer to help him out and he gets on it the form of Henry Parish, oh this is not good so not good.  Irving does not know the truth about Henry. Henry unties Irving from the bed and hand him a contract for him to sign.

I don’t think that Irving should be signing anything that Henry gives him.  Then Irving pricks his finger on the pen which causes his blood to run down the pen, no Irving do not sign that don’t do it.  Irving signs the document, oh this is not going to be good.

A great follow-up episode it was great to see Irving I had been wondering about him. The Horseman is rather manipulative, the question is does Katrina believe him or is she on Ichabod’s side. I think I might officially be Team Abbie, I was trying to give Katrina a chance but she is annoying me. This new Sheriff needs to go, she is not helping anything because she is not with the program. I foresee a lot of issues with her, especially with how things are in the town. Also what the hell did Irving sign because we all know it’s not good. Did he just give his soul away, he did just make a pact with the devil.