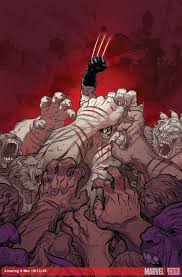 Back for another exciting adventure with the X-Men since this is the first of five issues. I would recap last week’s issue but really it was a filler issue that probably has no bearing on the upcoming miniseries so I won’t even bother.

The issue starts with two men arguing because Rick is accusing Eddie of sleeping with his wife. Rick gets mad and punches Eddie but this causes Eddies to snap his neck. Rick not wanting to go to jail for murder has Eddie ground up with the other meat at the packing plant. Besides, that this came out of an episode of Bones, eww so now some unsuspecting people are going to be eating human. This is what happened 52 hours earlier.

Next, we have Wolverine coming up to a cabin it is one owned by Heather and James of Alpha Flight. 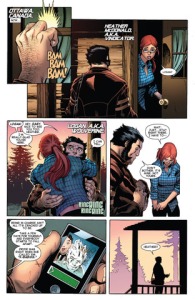 Heather tells Wolverine that James has been missing and the only reason that she has not gone after him is because they had a fight and she is not sure he coming back. Wolverine tells her that they are going after him no matter what because he is either in trouble or needs some sense smacked into him but either way Wolverine brought his suit.

Back the mansion Colossus comes by because Nightcrawler is back and he is happy to see him. This scene is amazing because Colossus can’t believe that Nightcrawler is alive and Nigthcrawler is like really because didn’t I attend your funeral. Then they pretty much proceeded to poke fun at how people just don’t stay dead in the X-Men.

Storm then comes wondering if Nightcrawler has seen Wolverine, Storm then goes and asks all the other teachers if they have seen him. Apparently Iceman knows where he went which pisses off Storm because she told everyone that Wolverine cannot leave without her knowing because oh his no healing factor. In this scene makes many of us wonder why Bobby Drake was chosen to be an X-Man, I think it had to with him being an Omega level mutant. 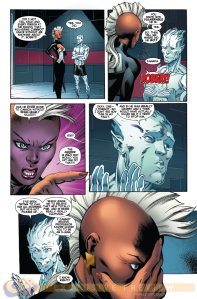 Heather and Wolverine touch down where James would have went and Wolverine sniffs for him, in doing so Wolverine is able to give a play by play of what happened.

I get his enhanced sense but I did not realize that it gave him near psychic abilities. I can’t understand how is he still able to smell adrenaline and things like that. Whatever Logan smells in that room causes him to freak out and he tells Heather to leave and get everyone.

Back at the mansion, Storm is using Rachael Summers I mean Grey to use Cerebro to track down Wolverine. It takes her a moment to find him and Storm threatening to get young Jean to do it.

When Rachael finds Wolverine she senses that he is scared, Wolverine never gets scared so Storm tell Rachael to tell Northstar to start up the jet.

In Canada, Heather is trying to get a hold of members of Alpha Flight but with no luck because people think she is calling to cry about James. Then whatever creature attacked James goes after Heather and fights and captures her? Not sure if she is captured or if she was pulled apart but since its Marvel, I’m going with captured. Wolverine hears Heather and start running after her only to find all the beast monsters.

This was actually a really good first issue of a new miniseries. It was not really dull, it didn’t have the horrible boring lead into things. The issue started off interesting because of the dead guy and continues that way. I am really looking forward to reading this series. Especially with Wolverine not having his healing factor it makes it even more interesting. Wolverine gets himself into some serious situations and since he is so use to having his healing factor he does not think. I find myself every time he goes into battle worrying about what will happen to him. Especially since Beast and Mr. Fantastic are working on a way to restore his healing factor.

What I am looking forward to in this now miniseries because it looks like it will have a good amount of action, it also looks like it will have a good storyline. I foresee some of Wolverine’s past with Alpha Flight coming out and possibly his former attraction to Heather, we all know Wolverine has a thing for red heads. It will also be nice to see the team running in save Wolverine, specially with Storm leading it considering that they are possibly dating or at least sleeping together. Not to mention I am going to be worries about Wolverine the whole time hoping that he does not get to hurt and die.