Pratt’s performance as Starlord, AKA Peter Quill, wasn’t the only one worth mentioning. In fact, you’d bee hard pressed to find an actor who didn’t fall very well into their role, and that’s including Vin Diesel as Groot. Granted, a lot of Groot and Rocket are CGI, but the voice acting, and the sound mixing (unlike the initial release of Bane’s Voice Over in “The Dark Knight Rises”) was seamless. Zoe Saldana’s already unique beauty lends itself perfectly to the ethereal qualities of Gamora, and she is able to go from tortured killing machine to endearingly overwhelmed voice of reason smoothly. 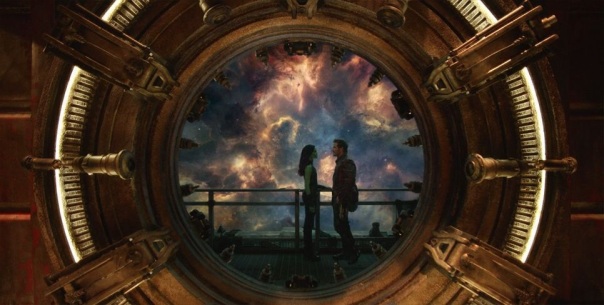 Dave Bautista’s first major foray onto the big screen was such an oxymoronic delight that Drax may be my favourite character. Between looking like he could tear you apart, knowing that, yeah, he probably could tear you apart, and then hearing the eloquence of his dialogue paired with the inability to grasp metaphor or colloquialisms made Drax a very 3-dimensional character for a man driven purely by the desire for vengeance. Bradley Cooper’s Rocket Raccoon comes across as a bit of a selfish dick with a Napolean complex, but we see several sides of the character through emerge through the different problems the fragile team faces, but he never loses his well-timed sarcasm.

As a story, it was enjoyable. Not necessarily their best, as it relied very heavily in some parts on exposition and a lot of dialogue to really tell the viewers exactly how all of these spacefolks operate, and to establish certain plot points.

The movie opens with young Peter Quill drowning his sorrows with a mix tape and a pair of foam headphones, and receiving a gift from and then witnessing the death of his mother… And then very awkwardly being pushed out of the room to grieve alone while the rest of his family mourns inside the hospital room. Naturally, the boy is distraught and runs outside alone… Where he is immediately abducted by a spaceship. 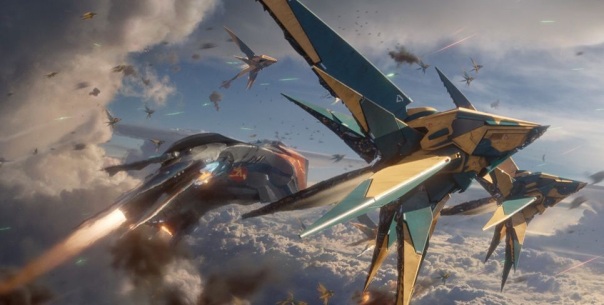 Twenty years later, we see Peter all grown up, still listening to his old cassette player and the tape of oldies that his mother had given him, scavenging for parts, thieving, and brawling, and having never opened that gift. When he welches on a dangerous job, a price is put on his head, and he ends up making the acquaintance of a pair of bounty hunters after his head (Rocket and Groot), an assassin sent to steal his stolen artifact (Gamora), and a particularly verbose prisoner (Drax). Together, they form a tenuous team which, having ups and downs and near death experiences galore, grows tighter and closer that any friendship any of them may have had individually.

And, while parts of the ending are a bit cheesy, I do like that the fate of the universe actually did rely on these people being able to put their bullshit aside and see the best in each other, coming together to fight a really, tremendously dangerous threat… Even if the villain does make such classic mistakes as leaving the heroes alive and monologueing.

But the really fun part, the thing to truly nerd out over, is that this movie is a perfect example of how well knit Marvel’s movie universe is. “Guardians of the Galaxy” is not a movie where we see any of the Avengers, or S.H.I.E.L.D., or even any of Earth outside of some podunk Southern American town for more than a few minutes, but we see that the fight for pretty much all of creation is not limited to the heroes (and villains) of Earth or Asgard. We see a much broader view of the universe through Peter Quill’s eyes and experiences, and we see just how massive the threat of the Infinity Stones is.

And just how epic this multi-movie, multi-year, huge revenue generating crossover of nerdgasmic proportions “Infinity Gauntlet” is going to be.

But another solid delivery from Marvel Studios?

I didn’t come into this movie as much of a fan of GotG, but I’m now interested to see more of this group.

Pushing the Marvel universe way deeper into traditional sci-fi territory, and somehow being able to be taken seriously, “Guardians of the Galaxy” is Fangirl approved.

Go watch it, and let us know what you think. And be sure to stay after the credits for the stinger! It’s EARTH-SHATTERING.