The Farscape Movie is Officially Happening 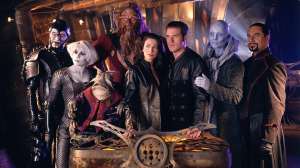 We broke news a few months ago about a possible Farscape movie in the works.  Well I am happy to report that it will officially be happening.  Rockne O’Bannon the shows creator and showrunner has officially confirmed this. TV.Com had this to report:

“Just a little bit of, maybe interesting, information to report. ;-p Texting me from WonderCon, a very good friend of mine (@PaulBurrows) just left the Showrunners Panel at [WonderCon]. A panel member, non other than Rockne O’Bannon, the co-creator ofWarehouse 13, Defiance, and Revolution… who was also Farscape‘s creator and showrunner – has indeed CONFIRMED a Farscape movie is happening.”

SpoilerTV followed up with this quote:

“Yeah, yeah it’s the worst kept secret…We’re far from production, but yeah, the first step is Justin [Monjo] working on a script for us. We’ll keep our fingers crossed.”

It was the worst kept secret because we all heard about it when the script was still in the initial stages.

As well know the new movie is supposed to follow John and Aeryn’s son when he is around the age of 19.  Here is a new synopsis of the reboot:

“Set to follow the awesome comics written by our favorite Keith R.A. DeCandido, the film would follow John and Aeryn’s son, D’Argo (or Little D, as we will always refer to him). Because their baby was exhibiting a set of interesting powers that made him a magnet for galactic villains, we find that John and Aeryn hide their son on Earth to grow up. Now the kid is 19 and ready to go into space with his parents.”

Is anyone else as excited for the Farscape movie as I am?