Grimm Recap: Eye of the Beholder 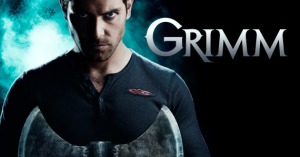 When last left off, Juliette’s friend Alicia is a Wesen (creatures that Nick hunts or in sometimes protects).  At the end of the episode, we learn that Alicia’s husband is also one; he might be a more vicious one since he hits her.  The Captain is starting a plot against his family and Adalind  (who is pregnant with his kid). 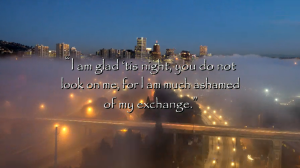 When the episode starts, Juliette is talking to her friend and Nick breaks it to her that her friend is a Wesen.  This information shocks Juliette; Alicia’s husband is across the street watching her.  Juliet eventually tells her friend that she knows that she is a Wesen but Alicia pretends to have no idea what a Wesen is.

In a diner later that night, a young boy sees a group of guys beating up another guy and his girlfriend.  The gang of guys sees the young man and they go after him but he manages to escape.  The owner of the diner describes the young man and his car to Nick and the other cops.

The cops get a lead on the kid who fled the crime scene.  It turns out the kids name is Jared and his sister Zuri who was Hank’s physical therapist.  Jared runs from the Nick who naturally tackles him because that is what cops do in TV shows.  Zuri tells Jared to keep calm and not to lose his temper, which is not something normal to say to someone unless the person is Wesen.  Nick and Hank get some info out of Jared but he would not tell them everything.  Zuri was also unhelpful when it came to them questioning and holding her brother.

Hank and Nick go to visit the girl who was beaten by the gang the night before.  She turns out to be a Wesen – I swear half the people in this town are Wesen.  She can immediately tell that Nick is a Grimm, which causes her to freak out because Grimms are the boogieman of the Wesen community.  Nick tells her he doesn’t care, right now he is there as a cop but he will come back as a Grimm if she does not cooperate.  She lets them know that the 7th Street gang attacked them. 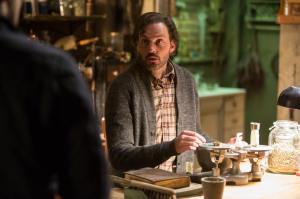 Monroe a Wesen and Nick’s Wesen know it all

Nick of course goes to his Wesen know it alls of Monroe and Rosalee.  Monroe does not know anything about any Wesen gangs but Rosalie does because back in the day she use to do drugs, she use to buy from them.  She said they are an entire gang of Wesens that never uses their real names.   After Nick leaves, Monroe and Rosalee have a moment, its obvious why they are a fan favorite couple.

The 7th Street gang grabs Jared’s girlfriend in order to find out about Jared. Hank calls Zuri to check in on her (aww he still cares even though she is being uncooperative) which turns out to be a good thing because the gang was coming after Jared at that point so Hank was able to call officers over to their apt immediately.  The gang tries to Jared but they can’t because of the cop interference.

Juliette goes over to Monroe and Rosalee’s place to tell let them know that she told her friend that she knows about her being Wesen.  Rosalee told her that many people are afraid to of what they are and especially don’t like telling other people.  Of course Juliette doesn’t listen well because she confronts Alicia about it the next morning with Nick who did not want Juliette to confront Alicia. 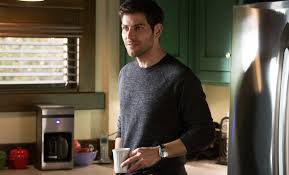 Juliette not realizing how much Nick is the boogieman of the Wesen world tells Alicia that Nick is a Grimm, which of course causes her to freak out. 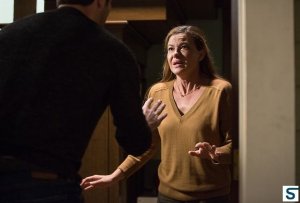 As Alicia tries to leave her, husband is outside the door, he barges into the house and punches Nick – well he basically punches him out, really where are those Grimm abilities Nick.  Joe – Alicia’s husband goes after her but Juliette jumps in literally she jumps on Joe’s back.  After some, struggling Joe throws her off and does his Wesen shift thing at her.  Juliette told him that she was not impressed and beats him with various items around the kitchen including a frying pan. 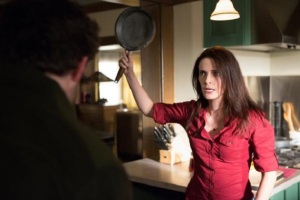 The frying pan; used for cooking and beating people – buy yours now

Alicia comes in and helps Juliette kick him, only then does Nick come in with his gun.  Really Nick, your girlfriend just kicked the guys ass, you are kinda late to party.  Alicia does the Wesen shift for Juliette so she could see what she is – which is basically what Rosalee is – then the girls hug.

Hank decides to stay with Jared and Zuri at the safe house aka hotel room. 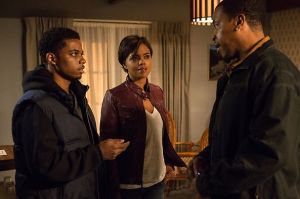 Sleepover at the safe house

Hank does a great job of bonding with Jared by playing video games with him.  Well Hank had to do something since he took the kid’s phone away from him.  While Zuri and Hank are having a deep moment Jared takes Hank’s phone and calls his girlfriend who has been kidnapped by the 7th Street Gang.  Hank finds his phone in the bathroom and a missing Jared.  When Hank asks Zuri who the number dialed belongs to she tells him that it Jared’s girlfriends number.  In the age of cell phones who knows anyone’s number anymore.  Jared knew his girlfriend’s number well enough to dial it from another phone and Zuri knew the number just by looking at it.  Obviously, that was something put in to move the story along. 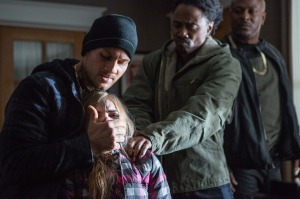 How will we get the kid over here? Oh, lets kidnap his GF.

Jared runs over to his girlfriend’s house to save her when the gang brings him in Jared’s eyes change to yellow.  I called it earlier Jared is a Wesen.  Hank and Nick show up and while they are standing outside the door, Nick’s new Wolverine heightened Grimm senses let him hear a gun being loaded on the other side.  I still do not understand how being affect by the one Wesen’s power turned Nick into Super Grimm.   Jared and his girlfriend are running out of the house, because Jared had done the Wesen shift thing earlier to help them escape (his girlfriend did not see this).  As one of the other gang members was about to attack Jared, his sister come out and attacks the gang member – she basically werewolf eats his neck. 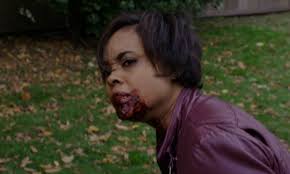 Zuri still a little bloody after she eats the guys neck

Hank convinces Nick that it was self-defense and then Hank gets Zuri out of there.  It helps to be in with the cops.

At Zuri’s place, Hank does his best to convince Zuri that he all right with her being a Wesen and that it does not change how he feels about her.  Since Zuri is not one of those Wesen who is comfortable in their own skin, she refuses.  Hank leaves all heart-broken.

I am not going to say this was my favorite episode of Grimm, but it was not a bad one.  I have greatly enjoyed new Juliette since she found out that Nick is a Grimm.  Her need to help and be there for him and the others she cares about has been great. It was nice to see how some Wesen are not comfortable with whom they are, but that there are humans in their lives who are alright with it.  Seeing the contrast to Alicia’s reaction and Zuri’s reaction was interesting.  Alicia felt freed knowing that Juliette knew and was comfortable with it.  While Zuri was not comfortable with the fact, that Hank knew and did not have a problem with it.  I liked that part of the show; I just wish that wasn’t what the whole episode was mainly about.

On next weeks, Grimm well as much as I saw before my recording cut off, there is a new Wesen in town and there is something to do with Scorpion venom.   Monroe finds a letter from Rosalee’s mom who I am guessing is coming to town.  That could be bad because I don’t think she know that her and Monroe are living together.